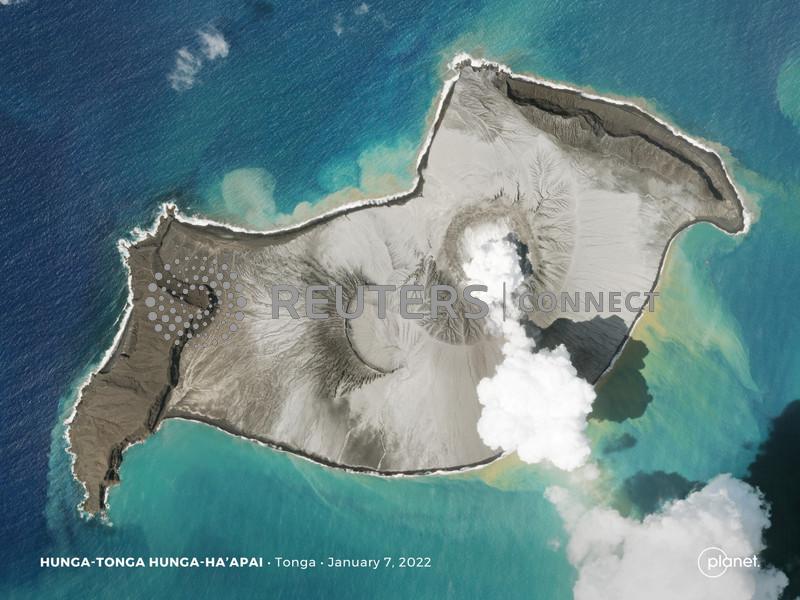 SYDNEY/WELLINGTON (Reuters) – Australia and New Zealand dispatched surveillance flights on Monday to assess the damage in Tonga, isolated from the rest of the world due to the eruption of an underwater volcano that triggered a tsunami and blanketed the Pacific island with ash.

“There’s been a lot of challenges there with the ash cloud and the disruption to communications and so we are working together to get as much support to Tonga as we possibly can,” Morrison told radio station 2GB on Monday.

Australia’s Bureau of Meteorology told Reuters in an emailed statement on Monday there was “no current volcanic activity, and the volcano is not spewing ash”. It said ash that had reached the Australian state of Queensland was from a previous eruption.

Australia’s Minister for the Pacific Zed Seselja said initial reports suggested no mass casualties and that Tonga’s airport “appears to be in relatively good condition” but there were “significant damage” to roads and bridges.

Seselja said Australia was liaising with the United States, New Zealand, France and other countries to coordinate responses.

New Zealand’s Defence Minister Peeni Henare said at a news conference in Auckland that power had been restored in large parts of Nuku’alofa and some communications are back up.

A New Zealand Hercules C-130 would perform drops of essentials after the requirements are assessed and the navy will also be deployed.

An underwater volcano off Tonga erupted on Saturday, triggering a tsunami on the shores of Tonga and cutting off phone and internet lines for the entire island.

There are no official reports of injuries or deaths in Tonga as yet but communications are still limited and outlying costal areas remain cut off.

Satellite images show some of the outlying islands submerged.

A U.K. woman has reportedly gone missing after she was washed away, media reports said.

Angela Glover and her husband James, who own the Happy Sailor Tattoo in Nuku’alofa, had gone to get their dogs when the wave hit. James managed to hold onto a tree but his wife, who also runs a dog rescue on the island, and their dogs were washed away, New Zealand state broadcaster TVNZ reported. Several social media posts from family and friends said she has still not been found.

New Zealand’s Prime Minister Jacinda Ardern said on Sunday that the tsunami had a significant impact on infrastructure.

Red Cross said it was mobilising its regional network to respond to what it called the worst volcanic eruptions the Pacific has experienced in decades.

Greenwood said the agency is expecting up to 80,000 people to be affected by the tsumani

“That is what we are planning for as a worst case scenario until we can get further confirmation from the people on the ground,” she said.

The agency said there were concerns that communities may not have access to safe drinking water as a result of saltwater inundation caused by the tsunami waves and ashfall.

The Hunga-Tonga-Hunga-Ha’apai volcano has erupted regularly over the past few decades but the impact of Saturday’s eruption was felt was far away as Fiji, New Zealand, the United States and Japan. Two people drowned off a beach in Northern Peru due to high waves caused by the tsunami.

About 26 hours since the eruption, nations thousands of kilometres to the west have volcanic ash clouds over them, New Zealand forecaster WeatherWatch said in a statement.

Fiji, Vanuatu and New Caledonia are affected and the ash cloud is expected to fan out towards eastern Australia on Monday, it said.

“This is an eruption best witnessed from space,” Cronin said.

“The large and explosive lateral spread of the eruption suggests that it was probably the biggest one since about the 1991 eruption of Pinatubo,” Cronin said.