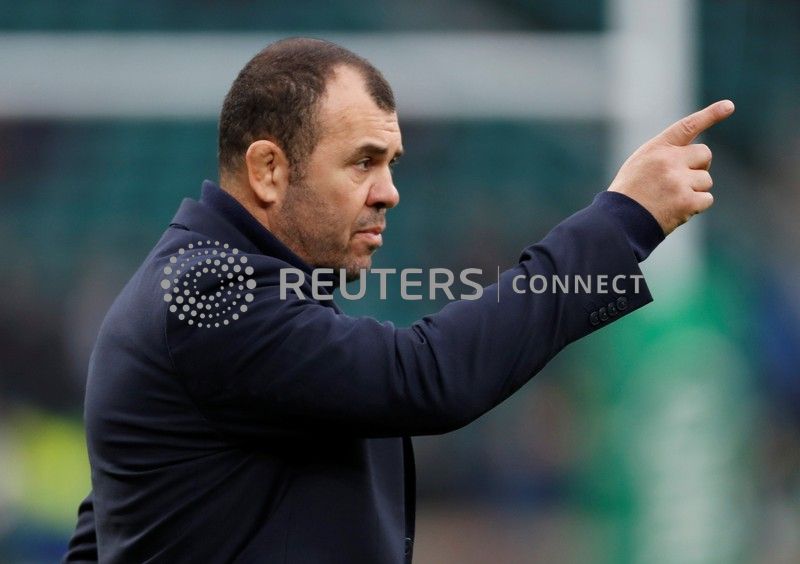 SYDNEY (Reuters) – Australia’s record 47-26 win over New Zealand on Saturday will have Wallabies fans dreaming that coach Michael Cheika might have finally struck on a winning formula just in time for the World Cup.

Whether it was alchemy or just plain luck after spinning the selection wheel so many times over the last four years, Cheika’s side in Perth looked like a team that can genuinely contend in Japan next month.

Ranked sixth in the world after a largely miserable and divisive four years for rugby Down Under, Australia hit their defensive straps from the start and ran the ball like Wallabies sides have always been supposed to.

It was by no means perfect — the move that led to the first of Reece Hodge’s two five-pointers was centimetres away from being an All Blacks intercept try — and the dismissal of New Zealand lock Scott Barrett certainly helped.

But where Wallabies sides of recent years might have struggled to finish the job, the 23 players in green and gold at Perth Stadium did it in style by racking up more points than any team ever has against the All Blacks in a test.

The pack built on their solid outing in their 16-10 victory over a tricky Argentina side two weeks ago, but it was in the backline that the Wallabies looked transformed.

As in 2015, when the Wallabies reached the World Cup final on the back of a run of form sparked by a win over the All Blacks in Sydney, returning players played a big role.

Four years ago, Cheika got Rugby Australia to change their eligibility rules and reaped the benefits through the return of the likes of Matt Giteau and Drew Mitchell.

On Saturday, scrumhalf Nic White, recalled this season after a gap of four years, was deservedly named Man of the Match but it must have been a tough decision.

James O’Connor vindicated Cheika’s decision not only to welcome a talented but often troublesome player into the fold after six years in exile, but also to play him in the novel position of outside centre.

The 29-year-old is no longer the thrilling talent that won his first cap at the age of 18 but offered the skills of a footballer in a position long dominated by more direct players and set up Hodge for both of his tries.

Kurtley Beale, who has always been available but looked like a character searching for a role while Israel Folau had a mortgage on the number 15 shirt, was back at his probing best at fullback and scored the final try.

The backline was marshalled by understated flyhalf Christian Lealiifano, who nailed his place kicks to punish the All Blacks for their ill-discipline while the match was in the balance in the first half.

Australia may yet get a swift reality check when they take on the All Blacks in the second Bledisloe Cup test at Eden Park next week, as also happened in 2015, but it will take quite a battering to completely empty their well of confidence.

“It was an awesome win,” inside centre Samu Kerevi, whose rampaging run down the touchline set up a try for White, said on Sunday.

“We’ll keep growing our belief in each other. We’ve gone through some rough times, not just with footy but some external things. That belief had to start with our work on rugby itself.”We build again for this week and another amazing opportunity.”