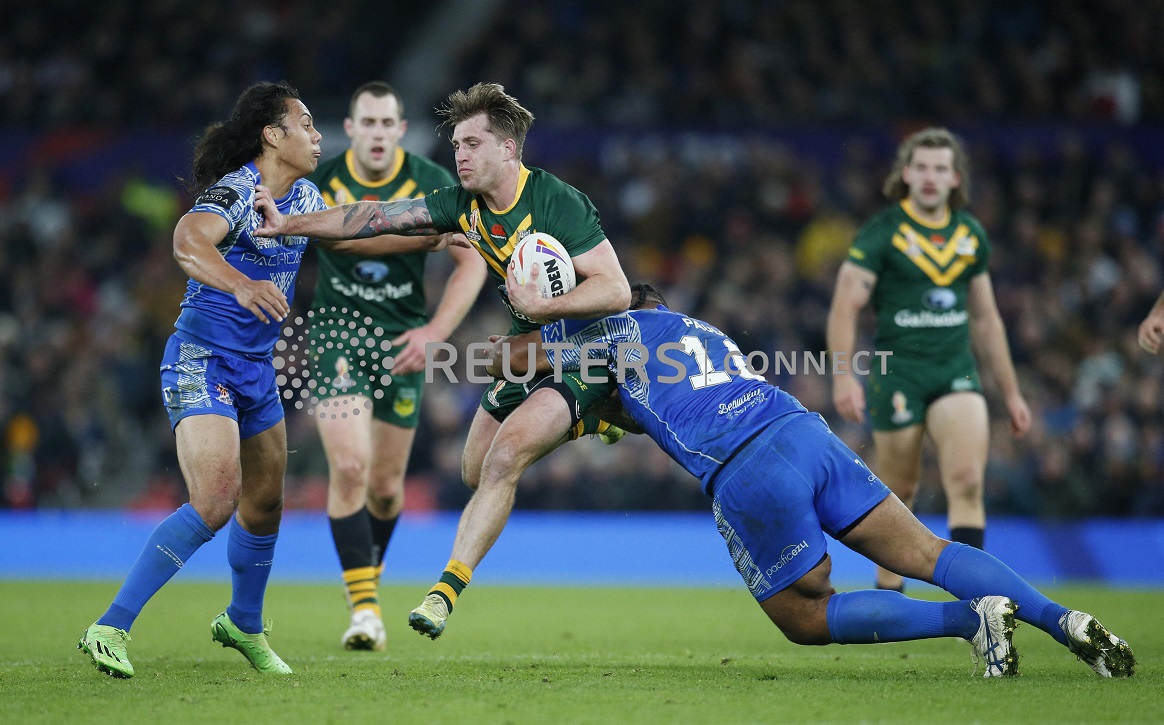 MANCHESTER, England (Reuters) -Australia made it nine titles from the last 10 Rugby League World Cups after proving too strong for Samoa in their 30-10 victory in the final on Saturday.

Samoa were the first Pacific Island team to reach the final in World Cup history after their thrilling golden-point victory over hosts England in the last four, and certainly had the backing of a packed Manchester crowd.

But after their solid start, two early tries from Latrell Mitchell and James Tedesco set firm favourites Australia on course to continue their domination of the competition.

Liam Martin’s third try of the tournament, after a sustained spell of Samoa pressure, gave the holders a 14-0 lead which they held until the break, before another converted try from Cameron Murray in the second half put Australia in total control.

To their credit, the Samoans did not give up and nearly brought the house down when Brian To’o deservedly got them on the scoresheet with a well-worked try, getting fans dreaming of a remarkable comeback.

The Kangaroos quickly dashed any such hopes with another try, a second of the game from Tedesco, before Samoa did have one more memory to take home from a memorable tournament as Stephen Crichton intercepted the ball and crossed the line.

Mitchell had the final say for the brilliant Kangaroos with another fine try in the final minute, ensuring that since 1972 Australia have only returned from one World Cup without the trophy in their hands.

“It’s fantastic,” Australia coach Mal Meninga said. “The first half was exceptional, we did what we needed to do. In the second half we scrambled well. It’s what you do, you work for each other.

“There is respect and humility for our jersey, for the opposition. We brought our best game tonight. We’ve had a long year but have been rewarded for effort tonight. What a way to finish our 2022 season.”

The Samoans also did a lap on honour at the end of the trophy presentation, having enjoyed a remarkable tournament that saw them recover from a 60-6 hammering against England in their opening group game to going all the way to the final.

“The result is disappointing, but for the effort and commitment, I could not be prouder of the group,” Samoa coach Matt Parish said.

“We did not get close enough to put enough pressure on them. We needed that bit of luck and needed a lot of things to go right for us today.”