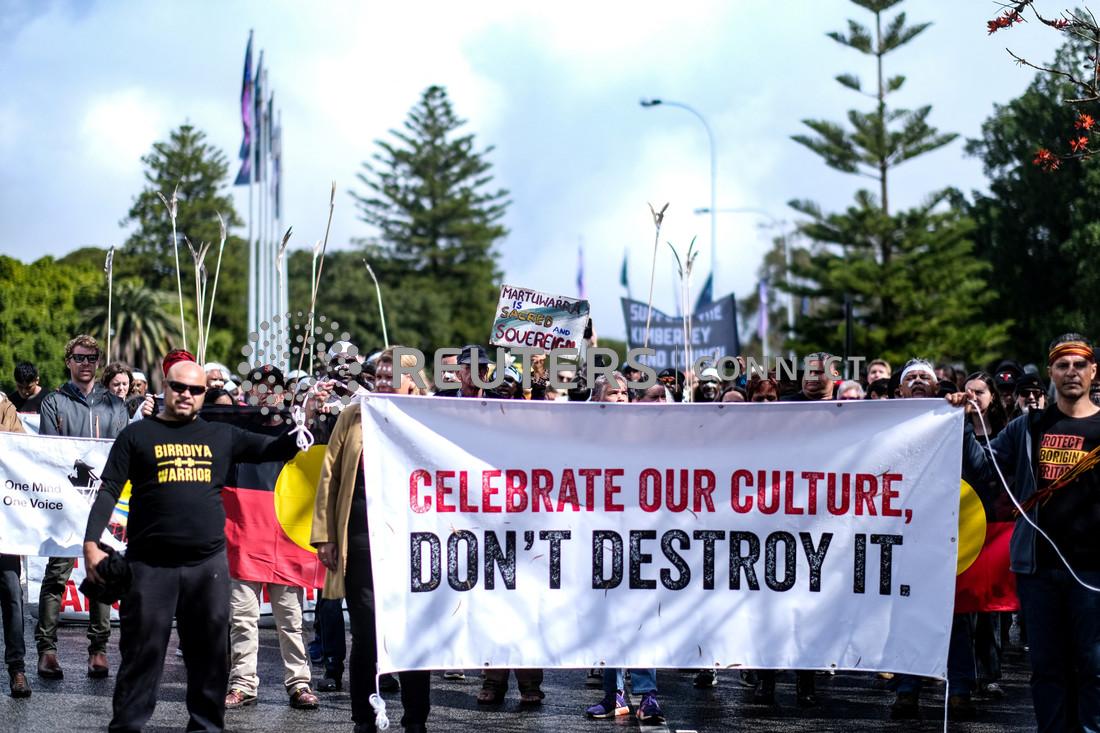 FILE PHOTO: Aboriginal groups' members carrying a banner march to protest against what they say is a lack of detail and consultation on new heritage protection laws, after the Rio Tinto mining group destroyed ancient rock shelters for an iron ore mine last year, in Perth, Australia August 19, 2021. Courtesy Gabrielle Timmins/Kimberley Land Council/Handout via REUTERS

The government had accepted all but one recommendation out of the eight from last year’s parliamentary inquiry into the destruction of the historically and culturally significant site at Juukan Gorge in Western Australia, Plibersek told parliament.

The recommendation of whether the final responsibility for heritage protection should sit with the Indigenous affairs minister or the environment minister is still being assessed, Plibersek said.

“This was not an isolated mistake or an example of one company going rogue. What’s clear from this report is that our system is not working,” Plibersek said, adding the destruction of the sacred sites were legal under current laws.

Widespread outrage at the destruction of the site put a focus on industry practices and cost the jobs of Rio Tinto’s then-chief executive and two other senior leaders and led Chairman Simon Thompson to step down in May.

The rock shelters had showed evidence of human habitation dating back 46,000 years into the last Ice Age and the destruction caused deep distress to the site’s traditional owners, the Puutu Kunti Kurrama and Pinikura (PKKP) peoples.

The traditional owners said they were angry and disappointed that they had not been consulted about the government’s response.

“All of this started with the destruction of our cultural heritage, everyone keeps on telling us they are sorry about it, but actions speak louder than words,” the PKKP Aboriginal Corporation said in a statement.

“We have tasted the devastation and we know what needs to be done,” it said, without elaborating.