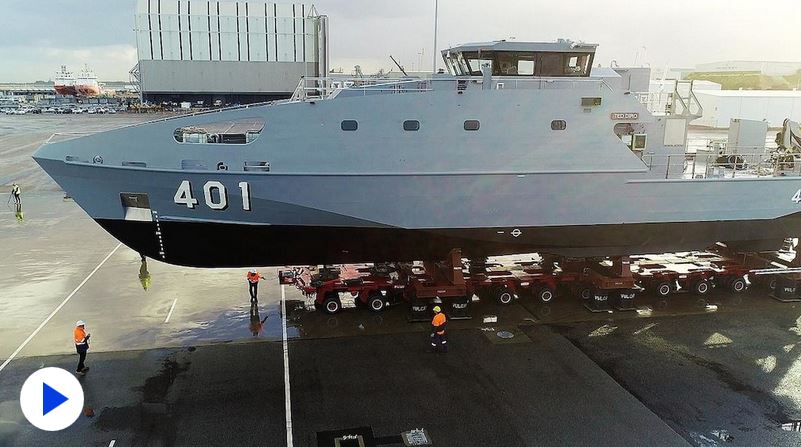 Austal has launched the first of 21 new Pacific Patrol Boats – named the Guardian Class – at Henderson in WA. Picture: THE WEST AUSTRALIAN

CANBERRA – Austal has launched the first of its Guardian-class Pacific Patrol Boats, floating the first vessel in the $335 million (US$255) contract.

The 39.5m patrol boat will be gifted to Papua New Guinea later this year, and is the first of 21 new watercraft destined for Australia’s regional neighbours under the program.

Chief executive David Singleton said it was a steel-hulled vessel and the Pacific Patrol Boat program was running on time and on budget.

Two other patrol boats are currently under construction at its Henderson shipyard, and work on a fourth will begin shortly, he said.

Austal is scheduled to deliver all 21 patrol boats by 2023, and hopes to add new orders for the class from other regional security forces.

Federal Defence Industry Minister Christopher Pyne said the vessel was the first off the ramp in the Government’s $90 billion (US$68 billion) continuous naval shipbuilding program.

“This particular boat will be gifted to Papua New Guinea in late October 2018, and is the first of 21 boats to be gifted to 12 Pacific Island countries and East Timor as part of the Pacific Maritime Security Programme,” he said.

The boats will be used to conduct maritime surveillance and enforcement operations, such as combating illegal fishing.