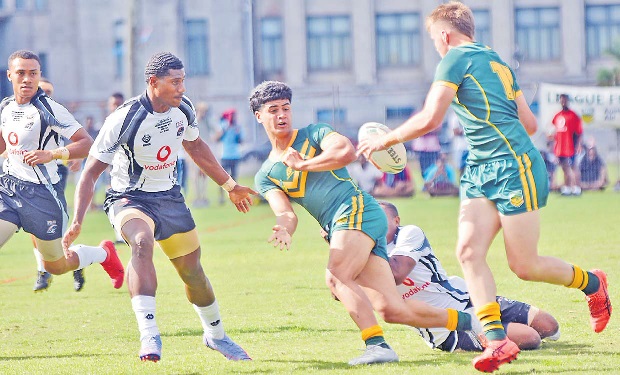 Australian’s Jesse McLean offloads to his captain Harrison Hassett against Fiji during their U18 Vuvale Challenge Shield match at Albert Park in Suva. Picture: JONACANI LALAKOBAU

Australia schools rugby league coaches say they are keen on helping grow the game in Fiji.

The Australian schoolboys and schoolgirls team returned home yesterday after participating in an inaugural Vuvale Shield challenge against their Fijian counterparts on Friday.

The schoolboys won their match 58-13 while the Aussie girls beat the home side 48-0.

Australian schoolboys coach Tim Wykes said what could be done in the future was to have a tri series involving Fiji, NZ and Australia.

“There can be a cycle but for us in Australia, obviously we have commitments to some other countries such as England, France, New Zealand. But what we can do, which can be a goal, is to get Fiji involved and we can get two games instead of one,” he said.

“This can be a goal for Fiji which they can suggest to our governing bodies. Unfortunately we don’t make those decisions otherwise we would have said ‘yes’. If that has to happen it can happen every second or third year and combine Fiji and NZ.

“I do know that talking to the NRL is that they are very keen on developing the Pacific nations and we’re talking about Papua New Guinea, Tonga, Samoa and Fiji, and probably the Cook Islands.”

Australian schoolgirls coach Melissa Spreyo said for the girls team, Fiji was the first team they played and it was good to keep a tradition going.

“Since this our first game on tour, one thing with the women’s rugby league is that it’s exploding and growing faster. With the girls it will be something that we welcome, to come and visit Fiji and play those games again and expand the pathway from there,” Spreyo said.