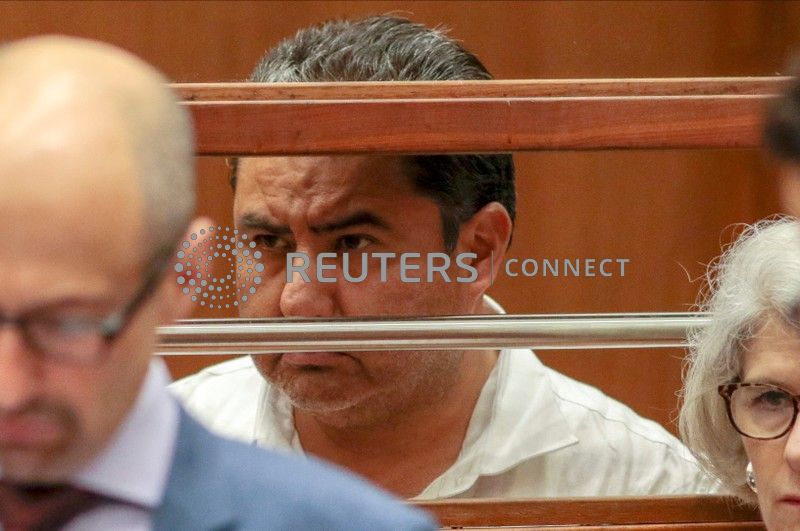 LOS ANGELES (Reuters) – The head of a Mexico-based church charged in Los Angeles with multiple sex crimes, including rape of a minor and a woman, is the victim of false accusations in a “high-tech hit job”, his attorney said on Friday.

An attorney for La Luz Del Mundo (Light of the World) church leader Naason Joaquin Garcia defended his client one day after California’s Attorney General Xavier Becerra appealed for more people to come forward who may have been sexually abused.

Joaquin Garcia, whose church claims at least 1 million followers worldwide and calls him “the Apostle of Jesus”, was arrested along with two women affiliated with the church at Los Angeles International Airport on Monday.

The state Attorney General’s Office charged Joaquin Garcia with rape of a minor, rape of a woman, lewd act upon a child as well as other sex crimes and conspiracy and extortion.

“My client, the apostle, is a victim in this case,” attorney Kenneth Rosenfeld said at a news conference on Friday.

“He is a victim of technology, of a high-tech hit job,” Rosenfeld said, referring to the ability to doctor photos and manipulate social media.

The investigation began in 2018, in part because of information submitted to the California Department of Justice through a state website set up to report clergy abuse.

In total, Garcia and his three co-defendants have been charged with committing 26 felony crimes in Southern California between 2015 and 2018. A criminal complaint said three minors and one adult woman were victims of the sexual crimes.

Joaquin Garcia was ordered held on $50 million bail at a court hearing on Wednesday.

It was the highest ever bail amount imposed in Los Angeles, which prosecutors said reflected fears Joaquin Garcia would raise money from his church followers and flee to Mexico.

Joaquin Garcia and two of his co-defendants, Alondra Ocampo and Susana Medina Oaxaca, have not entered pleas, pending a formal arraignment on Monday. A fourth defendant, Azalea Rangel Melendez, is still at large.

The church’s roots go back to the 1920s in Mexico. It rejects a mainstream Christian doctrine of the Holy Trinity, adhering to what church leaders describe as the earliest doctrines of Christian teachings.