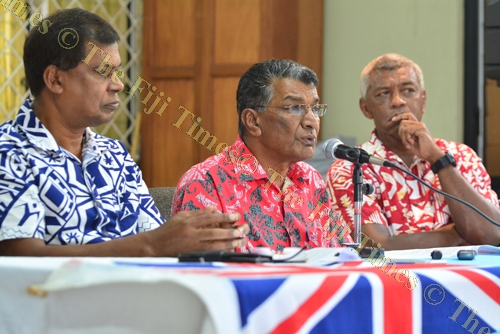 NFP provisional candidate Attar Singh (centre) speaking on his candidacy for the party during the announcement by the party at their office in Suva yesterday. Picture: JOVESA NAISUA

NATIONAL Federation Party provisional candidate, Attar Singh says he will use the 2018 General Election as a platform to raise awareness on workers’ rights in Fiji.

The former trade unionist was announced as a provisional candidate by party leader Professor Biman Prasad in Suva yesterday.

Mr Singh claimed his entry into politics marked a new beginning of another journey to help him end the alleged oppression of workers and trade union movements in Fiji.

“I have spent the better part of my life as a trade unionist fighting for workers’ rights.

Ordinary workers are finding it difficult to put food on the table,” he claimed.

Prof Prasad claimed there was no other unionist contesting this election with his experience.

“The workers of Fiji and the trade union movement can rely on him to protect and advance their rights and freedom in Parliament, more so in government.

“He had decided to sacrifice his career and accept the daunting task of correcting the imbalances and eliminating discriminatory practices,” he said.

Over the past 35 years, Mr Singh has represented workers in the aviation, telecommunications, mining industry, local government, energy sector, dock workers as well as championing the rights of canegrowers.

He was also a former leader of the party.