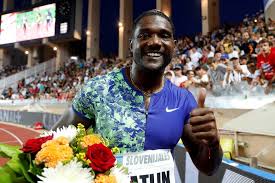 (Reuters) – Reigning world 100 meters champion Justin Gatlin should be back training within the week after tests were negative for a possible hamstring injury, his manager told Reuters on Wednesday.

The American sprinter slowed noticeably about 65 meters into a race he was leading and began grabbing his left hamstring before finishing fourth in Zagreb on Tuesday.

“He said he started to feel something grabbing, so he immediately tried to protect against any potential injury occurring,” Renaldo Nehemiah said in an email.

Tests to Gatlin’s hamstring “showed he still had 100% strength in the leg and there were no adhesions or anything,” Nehemiah added.

It was the second time within a week the 37-year-old had slowed in a race while leading.

Gatlin finished fourth in the Zurich Diamond League final on Aug. 29 after Nehemiah said he lost cadence after stumbling out of the blocks.

The Zagreb race, on a relatively cool evening, was Gatlin’s last before defending his world title in Doha later this month.

He is expected to resume training in Florida several days after returning home, Nehemiah said.