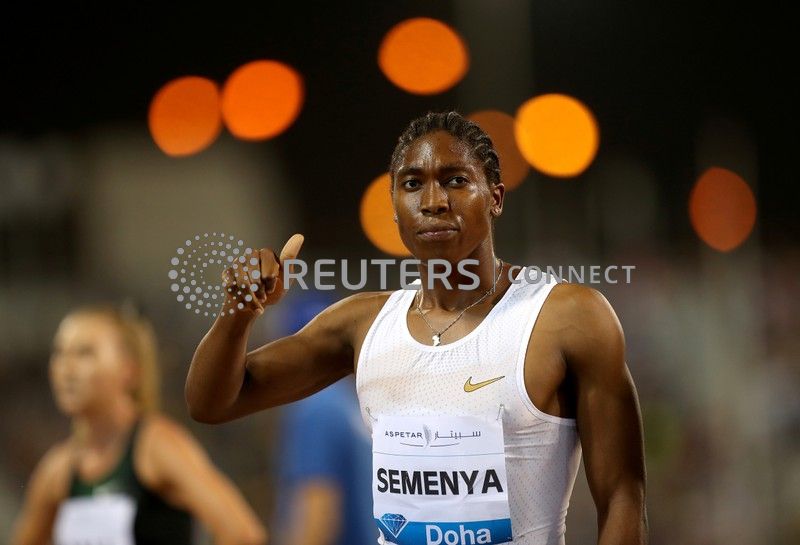 CAPE TOWN (Reuters) – The World Medical Association has called on its members not to implement new International Association of Athletics Federations (IAAF) regulations that restrict testosterone levels in female athletes with differences in sexual development.

The Court of Arbitration for Sport (CAS) this week dismissed an appeal by Olympic 800 metres champion Caster Semenya to set aside the regulations, which will come into effect on Wednesday.

However, the WMA, which represents physicians from 114 national member associations, said there was “weak evidence” that the regulations were necessary and that they should be scrapped.

“We have strong reservations about the ethical validity of these regulations,” WMA President Dr. Leonid Eidelman said in a statement on the organisation’s website.

“They are based on weak evidence from a single study, which is currently being widely debated by the scientific community.

“They are also contrary to a number of key WMA ethical statements and declarations, and as such we are calling for their immediate withdrawal.”

Under the rules, female athletes with high natural levels of testosterone wishing to compete in events from 400m to a mile must medically limit that level to under 5 nmol/L, which is double the normal female range of below 2 nmol/L.

The IAAF has said no athlete would be forced to undergo surgery and that oral contraceptives should suffice in allowing them to reach the required level.

The WMA has previously said the regulations “would constrain the athletes concerned to take unjustified medication, not based on medical need, in order for them to be allowed to compete, and accordingly require physicians to prescribe such medication.”

The association added it was unethical for physicians to prescribe treatment to lower testosterone if the condition was not recognised as pathological, and warned of the dangers of “artificially modifying blood constituents, biochemistry or endogenous testosterone”.

Semenya will run in the 800m at the IAAF Diamond League meeting in Doha later on Friday, her final event before the regulations come into place.

The 28-year-old, along with Athletics South Africa (ASA), is considering an appeal to the Swiss Federal Tribunal, but after this weekend will have to run with blockers unless she moves up to longer distances.

CAS recognised in their verdict on Wednesday that the regulations were discriminatory, but added they were “necessary, reasonable and proportionate means of achieving the IAAF’s aim of preserving the integrity of female athletics in the Restricted Events”.

IAAF President Sebastian Coe reiterated the organisation’s stance on Thursday at a media briefing in Doha.

“It is very straightforward for any association in sport,” Coe said. “Athletics has two classifications – it has age and it has gender. We are fiercely protective of both. We are really grateful that CAS has upheld that principle.”