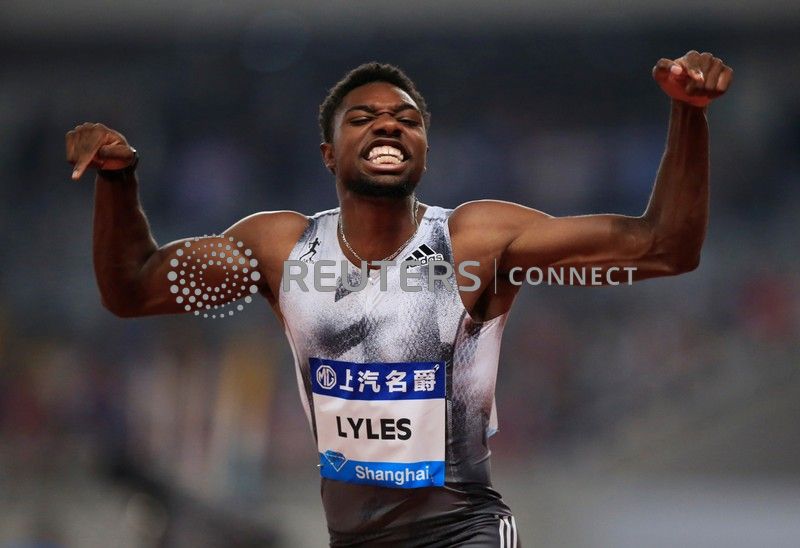 SHANGHAI (Reuters) – Noah Lyles exploded over the final third of the race to win a thrilling men’s 100m in a personal best 9.86 seconds at the Shanghai Diamond League on Saturday, pipping fellow American Christian Coleman in a photo-finish.

Coleman, in his first outing of the year, tore out of the blocks and looked to have the race under control at halfway until Lyle’s storming finish caught him with a dip at the line.

World indoor sprint champion Coleman was awarded the same time, the best of the year so far, and the top four all went under 10 seconds with Akani Simbine of South Africa third (9.95) and last year’s winner Reece Prescod of Britain fourth (9.97).

“I feel hot. I knew if I got out of the blocks and if I was anywhere close, I knew I could come late for the win.”

If the 100m augured well for the season in the sprints, the other most highly anticipated race of the evening, the men’s 400m hurdles, did not disappoint either.

Abderrahman Samba, who last year ran the second fastest time in history, went stride-for-stride with American Rai Benjamin, co-owner of the third fastest time, before pulling away off the final hurdle to win in 47.27 seconds.

“It was a great race and Rai and I pushed each other to the line,” said the Qatari, who will be looking to give the home nation success at the world championships in Doha later this year.

“This year is a big year and I feel better this year.”

“I was expecting to perform better,” said Jamaican Thompson, after her first 100 since midway through last year.

“I will be seeking better performances.”

Olympic and world champion Omar McLeod held off local Xie Wenjun to win the Shanghai 110m hurdles for the fourth straight year, crossing the line in 13.12 seconds before collapsing to the track in tears.

“It was difficult for me to compete today,” the Jamaican said. “My auntie Tracey died yesterday … I just wanted to finish, win and get the job done.”

Another fast finisher was Yomif Kejelcha, who kicked on the final lap to lead an Ethiopian podium sweep in the men’s 5,000m in 13 minutes 04.16 seconds — the best of the year so far.

Morocco’s Rababe Arafi also ran a world leading time in the women’s 1,500m in four minutes 01.15 seconds, and there was a world leading distance in the men’s javelin with German Andreas Hofmann’s 87.55 metres.

There was some local success for the crowd to cheer through Wang Yu in the men’s high jump and Lyu Huihui in the women’s javelin.