Asylum seekers say U.S. officials returned them to Mexico but kept their IDs 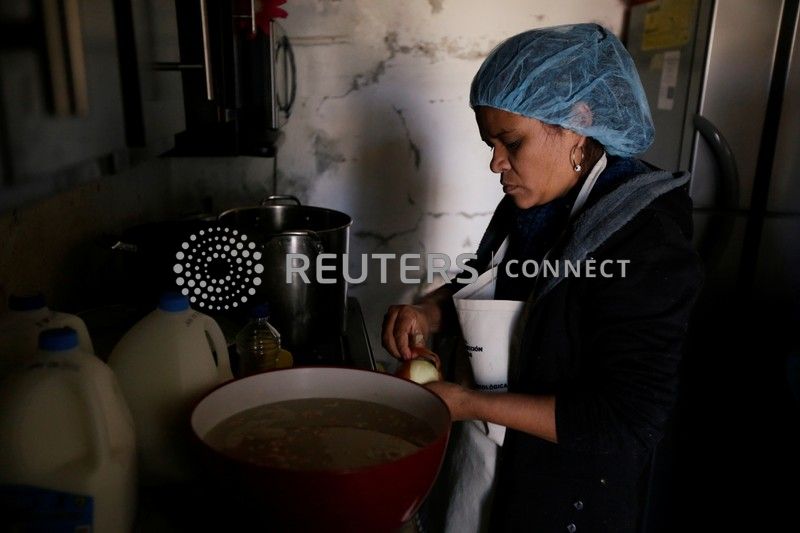 Salvadoran migrant Elizabeth Rodriguez, who is waiting for her court hearing for asylum seekers that returned to Mexico to await their legal proceedings under a new policy established by the U.S. government, cooks at a migrant shelter in Ciudad Juarez, Mexico May 21, 2019. Picture taken May 21, 2019. REUTERS/Jose Luis Gonzalez

CIUDAD JUAREZ, Mexico/SAN FRANCISCO (Reuters) – Virginia, an 18-year-old from Guatemala who is seeking asylum in the United States, had just one form of identification on her long journey north: her birth certificate.

Now, the teenager waits in a shelter in a Mexican border town while her U.S. asylum case is decided – minus the birth certificate.

Virginia said that when she turned herself in to immigration authorities in El Paso, U.S. officials took the certificate and refused to return it.

“The more I asked the angrier they got,” she said.

Discouraged by the asylum process, Virginia said she is considering abandoning her claim and going home but feels trapped without identification to show authorities along the way. She spoke on the condition that only her first name be published for fear of drawing attention to her situation.

Ciudad Juarez officials and migrant attorneys say many asylum seekers are in a position similar to Virginia’s, left with no identification because U.S. officials confiscated their documents before sending them back to Mexico. Without ​IDs​, they say, it can be hard for migrants to find work in Mexico, receive money from their families or even return home.

An official with the U.S. Department of Homeland Security, who declined to be named, said it has been federal policy since 2015 to return possessions to migrants upon their release from custody – except for documents believed to be fraudulent or altered. The official did not address whether the policy was being followed consistently and declined to comment on specific cases including Virginia’s.

Gil Kerlikowske, who was the commissioner of Customs and Border Protection when the 2015 standards were put in place, said the sheer volume of cases now might explain any departure from the policy. “We thought we’d solved that problem,” said Kerlikowske. “That said, I do understand the overwhelming number of people they are dealing with.”

The return of migrants to Mexico results from a recent Trump administration policy called Migrant Protection Protocols (MPP) that has forced thousands of Central Americans to wait south of the border while their asylum cases are pending. ​About 3,400 people have been returned to Ciudad Juarez under MPP since March, when the MPP program started there.

One Ciudad Juarez official, who directly works with migrants and who spoke on condition of anonymity because he was not authorized to be interviewed, told Reuters that the majority of those he has encountered were returned to Ciudad Juarez without their identification documents. He said some people lose their documents but others complain they were confiscated in the United States.

Another official, Enrique Valenzuela, general coordinator of the state commission for population, said that returned migrants had been appearing at an immigration office in Ciudad Juarez to ask for help. They reported “that they no longer had their identity documents because they had been taken away,” he said.

Valenzuela added that ​city officials ​took up the issue with U.S. authorities earlier this month and that the problem seemed to have improved in recent days. He did not provide details of the discussions. DHS declined to comment.

On a recent visit to the city, Reuters found 10 migrants besides Virginia who said U.S. officials took their identification documents and did not return them. Reuters was unable to independently verify their accounts.

U.S.-based immigration lawyers say failing to return documents has been a longstanding problem among migrants released into the United States or deported back to their home countries. But the attorneys say the issue is more worrisome in the context of the MPP program, because asylum seekers are waiting in a third country and are more vulnerable to arrest and detention. DHS officials did not comment on the issue.

In one case, according to two Ciudad Juarez officials, a Guatemalan asylum seeker waiting in the city with his young daughter asked a Mexican policeman for help returning to their country.

Rogelio Pinal, director of human rights for Ciudad Juarez, who helped to handle the situation, said the two had to wait in municipal offices for more than five hours because the father was unable to produce documents that would have proved their father-daughter relationship.

The father told the Mexican authorities that her birth certificate remained in the hands of U.S. immigration officials, Pinal and another city official briefed on the matter said.

The pair ultimately were released after confirming their relationship through other means and were transferred to a shelter where they considered their options, Pinal said.

Nancy Oretskin, an immigration attorney in Las Cruces, New Mexico, said one of her clients, a Salvadoran asylum seeker, ​told an immigration judge during his May 9 hearing in El Paso that he wanted to return home to his 6-month-old son, who was sick. She said the U.S. government attorney assured the court that her client’s ID, which was in the possession of immigration authorities, would be returned at the border. But that did not happen, she said.

According to Oretskin and Ariana Sawyer, a worker with Human Rights Watch, advocates went to the middle of the bridge connecting Juarez and El Paso, Texas, in a last-ditch effort to get his ID back, but U.S. officials refused to speak with them. DHS declined to comment on the case.

In an interview with Reuters, the migrant, Elmer, ​said ​he decided his only recourse was to travel 700 miles by bus to the Salvadoran consulate in Monterrey, seeking a replacement ID. Elmer spoke on condition that only his first name be used because he said he feared for his safety in El Salvador.

Even boarding the bus could have been complicated without ID, but Elmer said the driver was sympathetic and offered to help him explain if the vehicle was stopped by authorities.

Elmer returned home last Friday, after the consulate issued him a temporary ID and he was able to journey south by ​hitching rides and taking the bus. He said he was relieved to have made it back safely.

“Without documents,” he said of his time in Ciudad Juarez, “I felt as though I was imprisoned.”