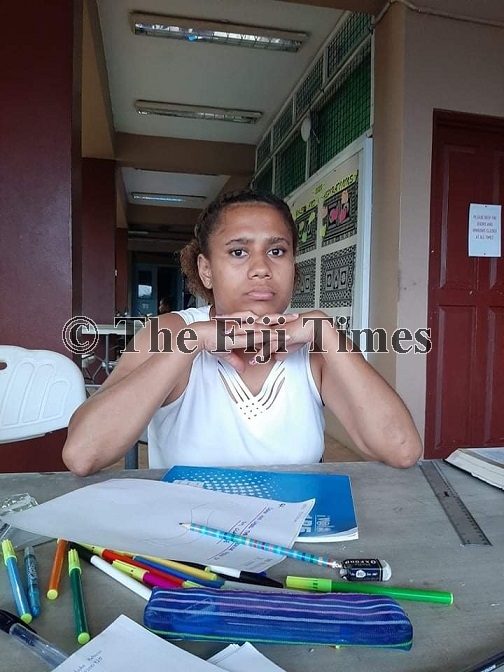 Ateca Waikere at the UniFiji Lautoka campus is eager to fulfil a dream. Picture: SUPPLIED.

When she lost her National Toppers Scheme scholarship, Ateca Waikere had no choice but to rely on her family to support her desire to become a doctor.

The 20-year-old Kadavu lass had initially been granted a scholarship to pursue nursing.

But she felt an urge to apply for the MBBS program, an endeavor supported by her mother.

So after completing Year 13, she tried to go for MBBS studies but the universities turned her down because she had not studied physics in high school.

After Ms Waikere changed her program to six-year MBBS, the TSLB notified her to choose between the scholarship or her dream as she was previously enrolled in a three-year contract with National Toppers Scheme.

The University of Fiji accepted her application but the Tertiary Scholarship and Loans Board terminated her Toppers scholarship.

She said working hard to secure a Toppers scholarship only to have it taken away was heartbreaking.

“I was so fortunate to obtain a National Topper Scholarship because it meant I would not have to worry about anything – the scholarship would have covered my tuition fees, meals, accommodation and other needs” she said.

“When I approached TSLB after making a decision to switch from nursing to MBBS, they told me I would lose the scholarship and I knew I was in for a struggle.”

Times got tough for her family after she lost her scholarship, as her parents provided her needs while also looking after their five other children.

“It was hard because throughout Year 13, I worked hard to get the Toppers scholarship so that my parents could spend their resources looking after of my younger siblings while I pursue my dream.

“When I lost it, I had to move out of the hostel in Suva.

“It was first time for me to be renting on my own and I had to look for a room and pay bond and rent.

“I had to buy my own groceries and bedding, pay my own bills and other needs.

“Sometimes, I had no bus fare to get to school, so I had to wake up early and walk to university.

“I had two other roommates, and we all struggled to pay our rent and often got scolded by our landlord.”

“Not having a scholarship and chasing my dream at my parents expense drove me to utilise all my potential.

“I knew there was no second chance for me. I had to succeed because I was living off my parents sweat.

“I learnt a lot in this journey – life is about transitions, some are good and some are bad.

“And this was just a glimpse of what the future would be like and I learnt that working hard and not giving up is the key.

“It also made me realise what sacrifices and hardship our parents go through to fulfill their children’s needs and wants.”

Ms Waikere said she decided to become a doctor after she lost her grandfather and the loss has driven her to aspire to help other people in the future.