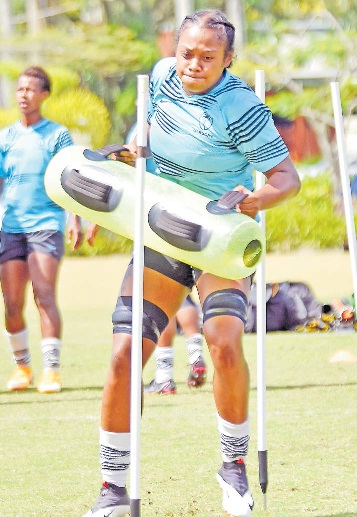 On April 16, 1995, 7s legend Waisale Serevi welcomed the birth of his second child, Asinate. Twenty-two days earlier he had just returned from the Hong Kong 7s tournament. He was the captain, and his side lost 17-35 to New Zealand which had Jona Lomu (late).

Twenty-seven years on, his daughter Nate, as she is commonly known, is carving a rugby resume of her own.

She is following her father’s rugby footsteps. She is a member of the Fijiana 15s side and is on the verge of playing in her first Rugby World Cup which is in New Zealand from October 8 to November 12.

The Serevis have been living in the United States for sometime after the 7s king retired from competitive rugby.

Unlike her father who only played for Fiji in 7s and 15s, Nate had represented the US against Canada during the 2016 Women’s Rugby Super Series.

Now Fiji. She towers over her father as a lock forward at 1.80 metres tall. Her father, a flyhalf and fullback, stands at 1.69m.

Nate has the physique and built from her maternal side – the Narumas, who were also elites of Fijian rugby.

“It has been one of the best decisions I had ever made by coming back home four months ago to play the sport I love and surrounded by friends and family,” Asinate said on Monday after helping the Fijiana 15s team beat New Zealand Wahine Maori last Friday at the HFC Bank Stadium in Suva.

She stood tall in attack and defence.

“The girls have been really helpful in welcoming me. They taught me a lot as a player on and off the field.”

Since then she has survived strenuous training sessions a Fijian side, especially women, could go through. They included military style training at the Fiji Navy camp at Togalevu and the renowned Sigatoka Sand Dunes.

“They were mentally tough places to train on, but awesome as they allowed us to bond and help each other. They encouraged us to work as a team and provided a good base for us as we look forward to the Rugby World Cup in New Zealand.

“The game last week against the Wahine Maori side gave us a good indication of where we are in terms of game strategy and skills.

“They exposed parts of our game that we needed to work on. So far everything has been going well. Going into this Friday’s match, we will need to ensure that we work together as a team and make sure everything connects on game day.

“If we can do all these small things right, the game would be entertaining.”

Asinate has a degree in Law and Justice from the Central Washington University in the US.