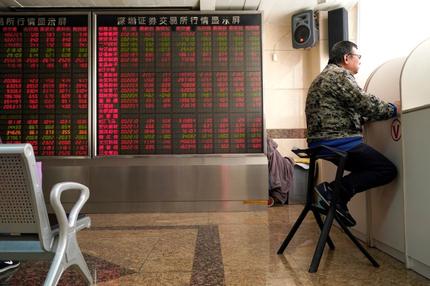 FILE PHOTO: An investor sits next to a stock quotation board at a brokerage office in Beijing, China January 3, 2020. REUTERS/Jason Lee

NEW YORK (Reuters) – Stronger appetite for riskier assets is set to lift Asian equities on Thursday, as government stimulus expectations support investor confidence in an economic recovery from the coronavirus.

Markets for risk assets have been on a tear, carrying major stock market indexes to within sight of pre-pandemic, all-time highs.

MSCI’s gauge of stocks across the globe moved up for the seventh consecutive trading day on Wednesday with a gain of 1.68%.

The rise came as the Nasdaq Composite, S&P 500 and the Dow Jones Industrial Average continued their rise from March cornonavirus-lockdown-lows to come within 2%, 8% and 11%, respectively, of overtaking all-time closing highs registered in February.

The dollar index fell 0.24% against a basket of other currencies early on Thursday, having hit an 11-week low on Wednesday. The euro rose as high as $1.1251, a level not seen since March 12.

“Liquidity provision by central banks – and expectations that more is coming – is helping to support the recent drive in risk markets,” ANZ Research senior economist Liz Kendall and strategist David Croy, said in a note early on Thursday.

But the analysts cautioned asset prices would need a recovery in the global economy to sustain gains.

The pan-European STOXX 600 closed at its highest since March 6. European markets have performed strongly so far this week as several countries eased strict lockdown measures.

The move to riskier assets continued to take down prices for U.S. Treasuries. The yield on the benchmark 10-year reached 0.7333% on Wednesday, up from 0.667% on Tuesday.

A closely watched part of the U.S. Treasury yield curve measuring the gap between yields on two- and 10-year Treasury notes, reached 55 basis points on Wednesday, the steepest level since mid-March. A steepening curve often points to a stronger economy.

Governments around the world have gradually started to lift tough lockdown measures imposed to contain the coronavirus which has infected nearly 6.4 million people and killed over 379,000.

Markets await Friday’s U.S. Labor Department May jobs report, which is expected to show unemployment soaring to a post-World War Two high of nearly 20% from 14.7% in April.

On Wednesday, a report showed that U.S. private payrolls fell less than expected in May, suggesting layoffs were abating as businesses reopen.

Investors are also focused on whether the European Central Bank will increase the size of its 750 billion euro ($669 billion) Pandemic Emergency Purchase Programme, when it meets on Thursday.

Oil prices rose again on Wednesday, briefly trading above $40 a barrel, the highest since March, and reflecting increased demand.