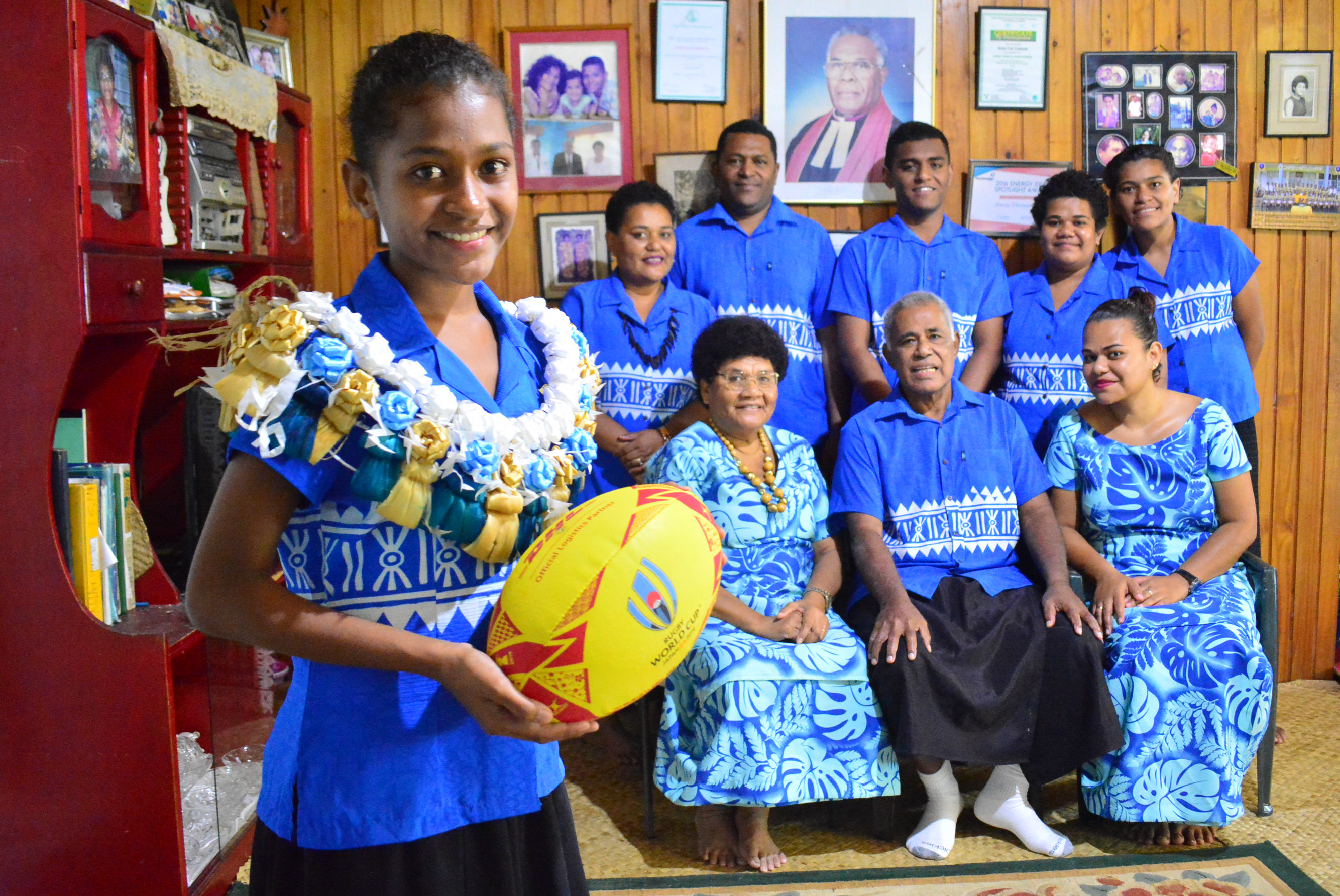 12 year old Adi Asenaca Caucau has been chosen to deliver the match ball for Fiji's last pool match against Wales at the 2019 Rugby World Cup in Japan later this year. She is pictured here with her family at their home in Cunningham, Suva. Picture: JOVESA NAISUA

ADI Asenaca Alowesi Lewatu Wellington Kadre Caucau was on cloud nine on Thursday when she found out she was going to be the lucky kid who will deliver the match ball for the Flying Fijians’ final pool match against Wales in Oita, Japan.

“I was so excited, honoured, blessed and emotional at the same time when I found out that I was going to be delivering the match ball for Fiji’s game, I was hopeful and kind of knew I was going to be chosen because I just had a feeling and I am so happy,” said Caucau.

The Year 7 student of St Annes Primary School entered the competition organised by DHL Express Fiji which gave a chance to a young Fijian to write why they deserved to be chosen to deliver the match ball in Japan.

“My mum found out about the competition and told me about it and that’s how I entered. I do not know much about 15s players because I mostly watch sevens but I do love rugby and I am really looking forward to meeting all the famous players,” said Caucau.

Although it won’t be the first time for the Vuna, Taveuni lass to travel by airplane, Caucau is looking forward to more than just delivering the match ball.

“I heard that they have bullet trains there and I want to ride on one, the food and also I’ll get to watch the Sumo wrestlers which is what I’ve always wanted to see.

“When my friends in school found out they were congratulating me and that made me feel good and made me look forward more,” she said.

Family support had been a driving force in Asenaca’s life and she was thankful that her extended family were also present to celebrate the news with her.

“My family are so supportive and I thank them, my grandparents and my paternal grandmother as well as my aunties, cousins and of course my parents,” said Caucau.

Proud mother Naomi Caucau could not hold back her tears when she heard her daughter was going to be the ball deliverer.

“On the day that we were going to find out if she was chosen, DHL called us up and told us that she was part of the top three students that were chosen and that we had to go for our last interview. But little did we know that Asenaca was already chosen by them.

“I would love to thank DHL for giving the opportunity to Asenaca and believing in us, also this is an opportunity for Asenaca to encourage other young girls out there that anything is possible, with rugby, girls can also be part of it,” she added.

Asenaca and her mum will be leaving for Japan prior to the Wales vs Fiji match in Oita, Japan in October.