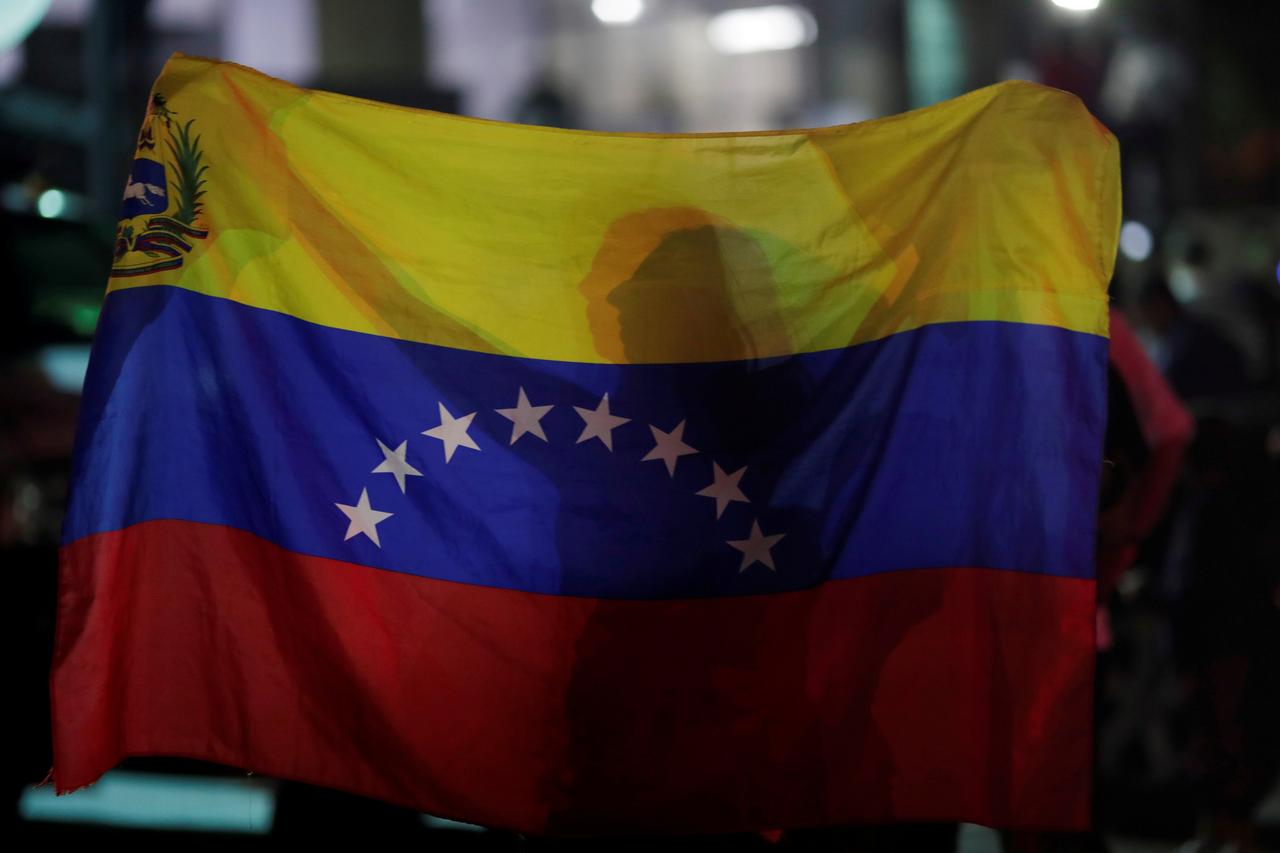 A woman holds a Venezuelan flag while participating in a candlelight vigil held for victims of recent violence in Caracas, Venezuela May 5, 2019. REUTERS/Ueslei Marcelino

CARACAS (Reuters) – A Venezuelan opposition legislator on Friday fled to Colombia while others said threatening messages had been spray-painted on their homes or intelligence agents had been following them, amid a broad crackdown by President Nicolas Maduro against congress.

The country’s top court this week accused 10 legislators in the opposition-run congress of treason for participating in a failed April uprising against Maduro’s government, and security forces on Wednesday arrested the second-highest ranking legislator, Edgar Zambrano.

Further arrests could cripple the functioning of the legislature, which has been a crucial part of the opposition’s strategy to unseat Maduro amid a hyperinflationary economic collapse that has fueled an exodus of millions of citizens.

A senior U.S. administration official said on Friday that the U.S. government had seen its contacts with Venezuelan military officials surge since the attempted uprising. Officials had also been in touch with the former head of Venezuela’s SEBIN intelligence service, who broke with Maduro last week and left the country, to offer support, the official said.

Luis Florido, one of the lawmakers accused of treason, said in a social media post that he left for neighboring Colombia to avoid possible arrest.

“I consulted with many of my friends before leaving the country, and they all told me I should not let them catch me, that I should not give a trophy to the regime,” Florido said.

Opposition leader and congress chief Juan Guaido, who assumed the interim presidency in January after calling Maduro’s 2018 re-election a fraud, on April 30 called on the armed forces to rise up against the government. The military never joined and the uprising fell apart.

In a speech on Friday afternoon, Maduro accused Cristopher, the former spy chief and a military general, of helping to plan the April 30 uprising, which he described as a “coup.”

He said he had full confidence in Defense Minister Vladimir Padrino and Supreme Court chief Maikel Moreno, who U.S. officials said had been in talks with the opposition about plans to oust Maduro. He said Padrino, Moreno and presidential guard commander Ivan Hernandez warned him of the plot a week in advance.

“He left his troops alone, he fled the first thing in the morning,” Maduro said, referring to Cristopher. “He is still in hiding, and the last time he spoke with me he said, ‘My commander in chief, I recognize your presidency’.”

Cristopher, who Maduro called a “traitor,” on Thursday shared a video from an undisclosed location urging Venezuelans to “build a new state” and combat corruption. Earlier in the week, the United States lifted sanctions on Cristopher, saying it hoped other senior military figures would align with Guaido.

“We have been in contact with General Cristopher,” the U.S. administration official said, speaking on condition of anonymity to a small group of reporters, noting that conversations continue.

The official said Cristopher was instrumental in releasing opposition politician Leopoldo Lopez, who emerged from house arrest on April 30 to join Guaido and has since taken refuge in the Spanish ambassador’s residence in Caracas to avoid arrest.

Earlier on Friday, lawmaker Maria Martinez posted a photo on social networks of a graffiti message she said was painted on her house on Thursday night that read “We’re going after the deputy.”

The message was signed with the word “colectivos,” which in Venezuela refers to armed pro-government gangs that opposition activists accuse of leading intimidation campaigns against Maduro’s critics.

The information ministry did not immediately reply to a request for comment.

Two legislators this week took refuge in the Italian embassy. Those denouncing intimidation on Friday were not among those accused of treason by the Supreme Court.

Zambrano, who was taken to the headquarters of the Sebin intelligence agency in a tow truck on Wednesday, has been transferred to a jail at the Fuerte Tiuna military base in Caracas, according to a statement by the court in charge of Zambrano’s trial.

Some 17 deputies are already either in hiding in embassies or in prison, according to opposition leaders. If another 15 deputies are detained or leave the country to avoid persecution, the opposition may not have enough deputies to hold sessions.

The ruling Socialist Party has since 2016 refused to recognize decisions made the opposition Congress.

But such congressional decisions are recognized by foreign governments, and have been crucial for managing offshore assets such as U.S. refining subsidiary Citgo and for making payments on bonds issued by state oil company PDVSA.