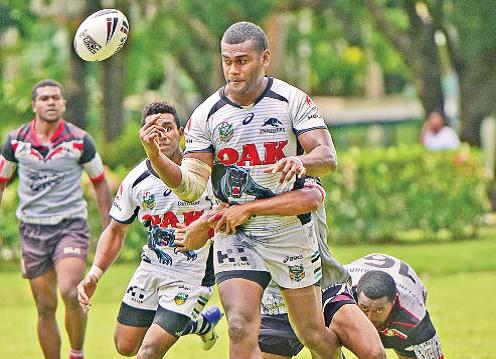 Action from Nadera Panthers and Topline Warriors during the FNRL 9s quater-finals at USP grounds on Saturday. Picture: RAMA

THE Army Bears have won the Fiji National Rugby League 9s tournament after defeating Makoi Bulldogs 18-4 on Saturday at the USP ground in Suva. The Sukuna Bowl rugby league champions led 6-4 in the first half.

The Delainabua brigade defeated Nadera Panthers 20-12 in the semi-finals and in the quarter-finals crushed Topline 30-9. Coach Jale Smith said since this was their first time playing in the 9s tournament, the young players had stepped up to the expectation of officials.

“We have been in the competition for three years now and we have learned a lot,” Smith said.

“We’ve gone through some challenges this year losing out in the security forces competition semi-finals because some of our players had personal commitments.

“The overall achievement was winning the Sukuna Bowl rugby league competition. We are grateful to our superiors for supporting us.

“We have a lot of new players joining the team this year, players from the age of 20-26 who had just started playing this sport for the first time.

“We saw the development that we didn’t and how the players have improved in their performance playing against some of the top teams.

“We are grateful that our player and 7s new flyer Aminiasi Tuimaba has set the platform for our other players to follow that anything is possible if you believe in yourselves.”

Smith also added that with the season now over they have shifted their focus to their off season training.

“Our aim is to win the Vodafone Cup competition.”

The FNRL management have also requested all interested teams wanting to join the Vodafone Cup competition next year is to pay $1000 registration fee which will close on January 18.