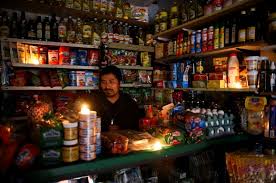 A vendor waits for customers during a national blackout, in Buenos Aires, Argentina June 16, 2019. REUTERS/Agustin Marcarian

Macri said the blackout had been prompted by a failure in the country´s coastal grid, but said that officials still did not know what had caused the problem.

Half of Argentina had power by mid-afternoon, Macri said.

Energy company Edesur Argentina called the outage “exceptional” and said it would likely take the rest of the day before it could return electricity to all its customers.

The blackout comes amid a deepening economic crisis in Argentina that has left nearly a third of the country in poverty, pushed interest rates skyward and sent the peso tumbling against the dollar, prompting mass protests throughout the country.

Images from social media showed long lines of cars at the few service stations still in operation in Argentina’s capital city and traffic lights dark, creating chaos in places even on a normally quiet Sunday.

“The city is a disaster. There are no traffic lights. Stores aren’t open. It spoiled Father’s Day,” said 75-year-old retiree Liliana Comis, of Buenos Aires.

The outage also spilled over into local and national politics.

“Millions of Argentines, who have had to pay astronomical rates for electricity to benefit those in power, are still waiting for power to return to their homes,” Alberto Fernandez, a Peronist presidential candidate looking to unseat incumbent Macri in this year’s hotly contested elections, said in a tweet Sunday afternoon.

A spokesman for Argentine state oil company YPF told Reuters that its La Plata refinery, a critical link in the country’s oil infrastructure, had been shut down following the outage.

Argentina is home to the Vaca Muerta shale formation, one of the world’s biggest reserves of shale gas and oil. It was not immediately clear to what extent drilling operations there had been impacted.

Uruguay’s government-owned utility UTE said it had restored power to 75% of the country by 1:30 p.m. local time (1730 GMT). It told its customers in a statement that there existed “no other examples of such events like this in recent years.”

In Paraguay, the capital of Asuncion was unaffected by the outage but local providers said they were restoring power to smaller cities and rural areas.

A spokesman for Brazil’s power system operator (ONS) said the outage had not impacted the regional neighbor to the north.