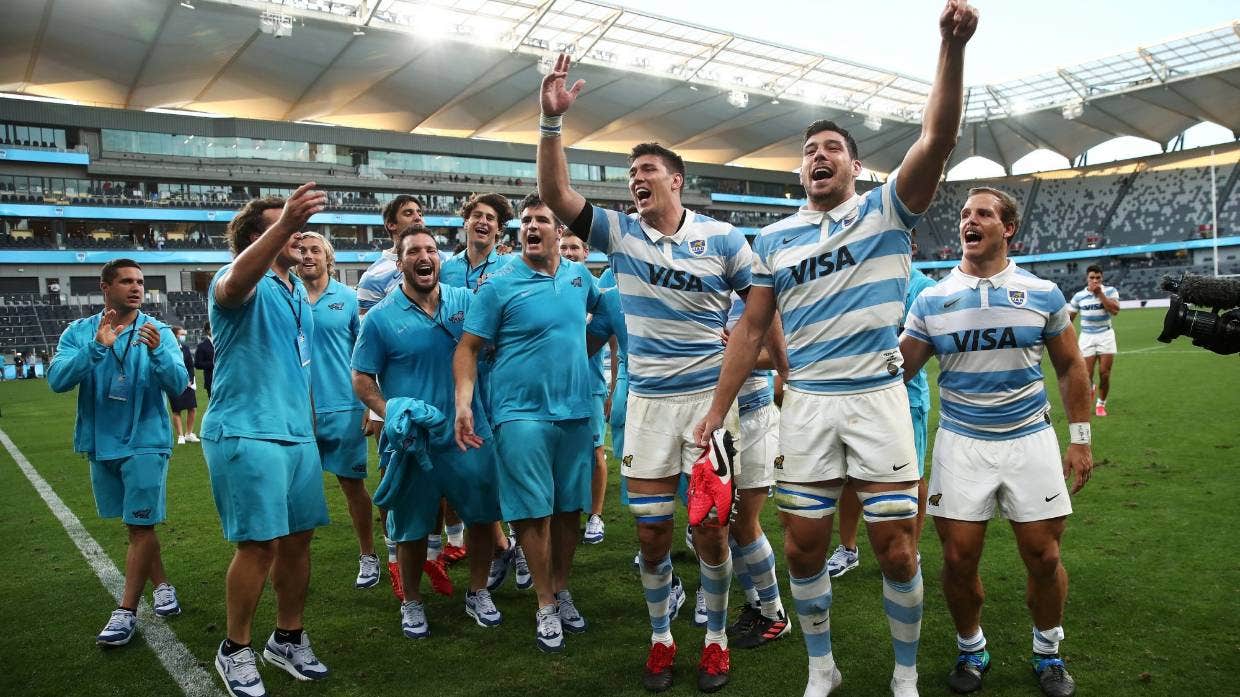 Guido Petti and Matias Alemanni of the Pumas celebrate with team-mates after beating the All Blacks 25-15 in Sydney last weekend. Picture: STUFF SPORTS

On a freezing night in Christchurch 16 months ago, the Jaguares players wept with frustration following a devastating loss in the Super Rugby final.

Last weekend many of those men were again crying, this time with joy, after Argentina beat the All Blacks 25-15 to record an historic victory in Sydney.

But, first, it pays to re-wind to why the Jaguares were blubbing into their towels on July 6 last year.

Shattered after the 19-3 defeat to the Crusaders in the Super Rugby final, the Jaguares, spearheaded by a man-of-the-match performance from back rower Pablo Matera, wondered what more they could have done to roll the defending champions.

The Jaguares had qualified for the final within 4 years of joining the competition, a monumental effort in itself, and if not required to travel 10,000km to Christchurch they wouldn’t have been limited to just one decent training run before facing a side heaving with All Blacks.

This was their plan for the seasons ahead: to host a final in front of their passionate people in Buenos Aires, where it would be their turn to point a flamethrower at a jet-lagged opponent.

No chance of that now. The Jaguares will never get another crack at a title.

Covid-19 has been catastrophic for the Jaguares’ organisation, which spent years convincing Sanzaar to allow it entry into Super Rugby.

When Covid-19 accelerated the break-up of Super Rugby earlier this year it not only left the Jaguares without a competition, it has also decimated their roster; a number of players, with the blessing of Argentina’s rugby union (UAR) which needed to reduce its wage bill, have since signed with European clubs.

NZ Rugby, which expects to post a loss of around $40 million due to the pandemic forcing the closure of Super Rugby in March as well as disrupting the All Blacks’ test programme, played a role in the Jaguares’ demise.

In its defence, NZ Rugby had little choice. In times of crisis, self-preservation is king.

Having recognised its fans were turning-off from Super Rugby in their droves, as were subscribers to Sky Sport, NZ Rugby had to win back supporters with a better, streamlined competition model.

Which was bad news for the Jaguares.

Following the success of Super Rugby Aotearoa, NZ Rugby led the charge to cut the Jaguares and four South African teams adrift. The Sunwolves, from Japan, were already toast after Sanzaar effectively booted them out.

Given everything that has happened during the pandemic, it’s understandable the Jaguares demise didn’t create bold headlines in New Zealand.

While South Africa Rugby Union was angry about its teams being unwanted by NZ Rugby, and will now send them north to join the Pro 14, reports here about the Jaguares’ plight were scant.

Given the sport remains mostly amateur in Argentina, the Jaguares were left in a difficult position. UAR president Marcelo Rodriguez has said was “optimistic’’ about the team’s future, despite the chaos created by Covid-19.

“We are sure that in one way or another, Jaguares will be put in a competition that is economically and financially stable for UAR,’’ Rodriguez told ESPN.

There has been speculation the Jaguares could join Superliga Americana de Rugby, which includes another team from Argentina as well as others from Chile, Brazil, Paraguay, Colombia and Uruguay.

The ramifications for the national team are obvious. Contracting professional players to one team in Argentina was a big plus for the Pumas coach, even though they failed to advance past pool play in the World Cup in Japan last year.

Then, amid all the madness created by the pandemic and in their first game since the World Cup, the Pumas mustered-up the energy and muscle to upset the All Blacks.

It was a monumental effort and many New Zealanders, albeit disappointed by the All Blacks’ poor effort, respected the Argentinians’ resolve and determination.

Sanzaar has confirmed the Pumas will remain in the Rugby Championship along with the All Blacks, Wallabies and Springboks until 2030.

The Jaguares, meanwhile, have to fight for survival without the help of their former Super Rugby counterparts.

The timing couldn’t be worse. Building momentum and raising the game’s profile in football-bonkers Argentina following the Pumas’ famous win over the All Blacks is a must for the UAR. It knows it must build on this result.

The Pumas took a giant leap forward in Sydney. It remains to be seen if the game can prosper. If so, it may have to be without the Jaguares.