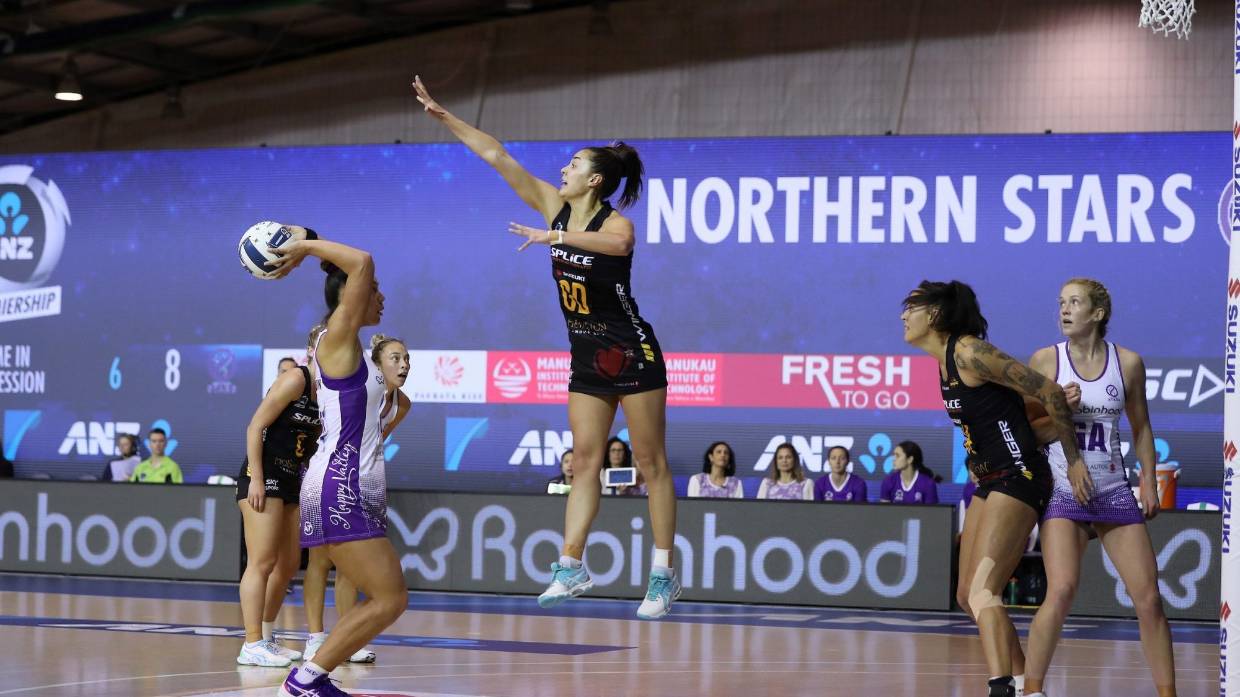 There was no separating the Northern Stars and Waikato-Bay of Plenty Magic on Monday night as they drew 46-46 at Auckland Netball Centre.

It was the first draw in ANZ Premiership history, with overtime eliminated this year in the wake of the Covid-19 pandemic.

The Magic trailed by six with just under four minutes to go, but scored the final six goals, only to concede a penalty and turn the ball over when a seventh that would have won it was there for the taking.

They had begun the evening by surging out to a 5-0 lead, but in between the two streaks the Stars outscored them 46-35 and looked to have the result in the bag.

The Stars had possession with a one-goal lead and 40 seconds to play, but Magic wing defence Sam Winders came up trumps with an intercept that meant the points were ultimately shared two apiece.

She was asked by Sky Sport afterwards if it felt like a win and she replied: “Almost”.

“We were this close.

“It would have been nice (to win), but man, we’ve worked hard these last couple of days.

“I’m just proud of the effort and the heart because that’s what the Magic is all about.”

After equalising, the Magic had 20 seconds to find a winner, so they worked the ball methodically to the circle, where Abigail Latu-Meafou was penalised for contact and denied the chance to put up a shot.

The draw moves the Magic off the bottom off the ladder and past the Southern Steel while the Stars remain in fourth.

Out in front it’s the defending champions, the Central Pulse, who have won five from five, and four points behind them it’s the Northern Mystics, who have beat the four teams below them and only lost to the Pulse.

Each team has now played every other team once, with four rounds out of 10 completed, and the writing is already on the wall for the grand final on August 23, with the third-placed Tactix seven points behind the top two.

The Magic came into Monday night licking their wounds after being thumped by the Pulse on Sunday and they appeared headed for a second loss in a row before their late heroics.

They were at the best when Erena Mikaere and Holly Fowler were together in the defensive circle, keeping Maia Wilson busy and forcing Jamie Hume to take on added responsibility at goal attack.

When Mikaere and Fowler were together, the Magic outscored the Stars 36-28, but when Georgia Tong was on for Fowler, a change that lasted a quarter, they were outscored 18-10, a contrast that nearly left them on the losing end.

The Stars surged out to a seven-goal lead at the end of the third quarter and looked to have kept the Magic at bay, until the rally at the death left them with two points instead of four.