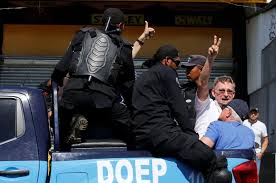 A demonstrator gestures as he is detained by riot police during a protest against the government of Nicaragua's President Daniel Ortega in Managua, Nicaragua March 16, 2019. REUTERS/Oswaldo Rivas

MANAGUA (Reuters) – Protesters targeting Nicaraguan President Daniel Ortega took to the streets on Saturday, demanding the release of all political prisoners and turning up the heat on the political crisis that has consumed the country since last year. Protest organizers and witnesses told Reuters that some protesters who gathered at various points in Managua, […]