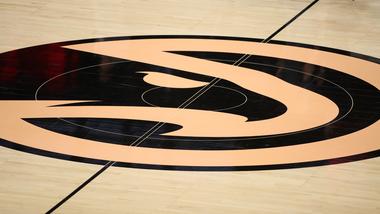 Nov 20, 2019; Atlanta, GA, USA; A general view of the Atlanta Hawks logo at midcourt before a game between the Hawks and the Milwaukee Bucks at State Farm Arena. Mandatory Credit: Jason Getz-USA TODAY Sports

Giannis Antetokounmpo had 33 points and 11 rebounds, and paced the visiting Milwaukee Bucks to a 135-127 win over the Atlanta Hawks on Wednesday.

It was the ninth time that Antetokounmpo has had 30 points and 10 rebounds in a game, best in the league. He has accomplished the feat in eight of his last nine games. Antetokounmpo was 12-for-17 from the field, but only 1-for-6 on 3-pointers.

The Bucks have won five straight, nine of their last 10, and completed the road trip with a 3-0 mark. Milwaukee has won eight of its last nine against the Hawks.

Eric Bledsoe added 28 points, seven rebounds and five assists for the Bucks. It fell just short of his season high of 31.

Atlanta tried to rally in the fourth quarter by scoring 44 points. The Hawks used a 13-1 run to cut Milwaukee’s lead to 126-119 with 2:10 left on a basket by DeAndre Bembry. But Milwaukee’s Sterling Brown emerged from a timeout to hit a 3-pointer and re-establish the double-digit lead. The Hawks never again got closer than seven.

The loss was the fourth straight for Atlanta, which returned home after going 1-4 on a West Coast road trip.

Atlanta was led by rookie De’Andre Hunter, who scored a career-high 27 points — nine more than his previous best — and 11 rebounds for his first career double-double. He was perfect on three 3-point field goals.

Milwaukee wasted an early 10-point lead but led 34-26 after one quarter. Atlanta, behind rookies Hunter and Reddish, paced the Hawks to a 61-58 halftime lead. Milwaukee scored 38 points in the third quarter for a 96-83 lead.

Milwaukee completes a back-to-back at home on Thursday against Portland. Atlanta plays again on Friday when the Hawks face Detroit.