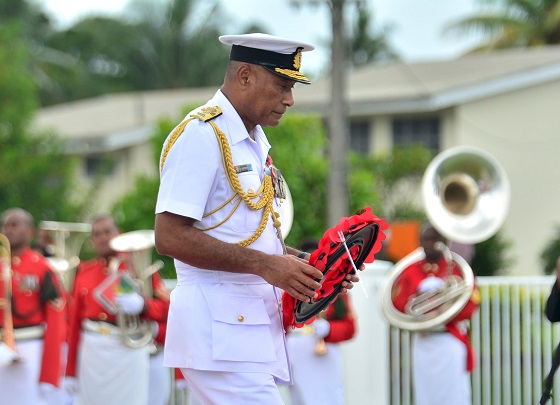 IT was an emotional day for many families around the country as they commemorated Remembrance Day for the lives lost while on duty.

In Suva, families and friends of war veterans, families of the fallen soldiers, police officers, government officials and members of the diplomatic corps gathered at the National War Memorial site in Nasese to lay wreaths for their loved ones.

A total of 124 Fijian soldiers lost their lives during World War I, 50 in World War II, 18 in Malaya, 35 in Lebanon, 14 in Sinai, five in Golan Heights Syria, three in East Timor, six in Iraq and one in South Sudan.

esterday, he recalled how he led a troop to Lebanon where one of his men, Soro Naivalu, died.

“It was during Christmas that we went so I took with me a letter to deliver to one of my boys but he didn’t read that letter because when I was walking back to my office, I saw the helicopter.

“It was actually transporting his body to the hospital,” he said.

Mr Naivalu said the letter was from the late Mr Naivalu’s wife.

“We should always remember those who died while serving.”

Meanwhile, yesterday’s Remembrance Day began with a dawn service which is held on November 11 every year to honour Fiji’s valiant soldiers.