Ambassador Prasad: Countries across Blue Pacific on the move 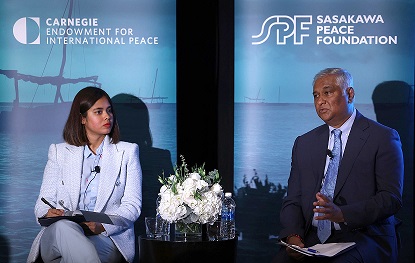 People, communities, and countries across the Blue Pacific are on the move, building their economies, expanding their trade, and connecting and welcoming the rest of the world.

Mr Prasad was a keynote speaker at the UNGA77 Side-Event on ‘Ocean Nations – An Indo-Pacific Islands Dialogue’ and said the Blue Pacific was diverse, an oceanic superpower, and it was thriving.

He said multilateralism mattered the most to small States of the Blue Pacific and the region.

He applauded the recent expansion of partnerships on the global stage in key sectors such as climate and oceans, trade and investment, and security, among others.

According to Mr Prasad, the only frameworks that mattered to Blue Pacific in the geopolitical competition of the present day were those that Blue Pacific created, accepted, and proposed such as the “Blue Pacific 2050 Strategy”.

On the issue of the climate crisis, he reminded the global audience “that stable climate and safe oceans matter to every Pacific Islander, and emphasised Fiji’s commitment to achieving net zero by 2050″.

He urged other nations to scale up commitments to climate actions and commit to the net zero target.

Mr Prasad also spoke on the core challenges faced by Fiji and the Pacific Island countries, highlighting the impacts of the COVID-19 pandemic, climate change, and development challenges that the region faced.

He also reflected on the important steps taken by Fiji to strengthen regional solidarity and advance regional interests in the international arena.