Amanda Knox breaks down in Italy as she relives murder trial 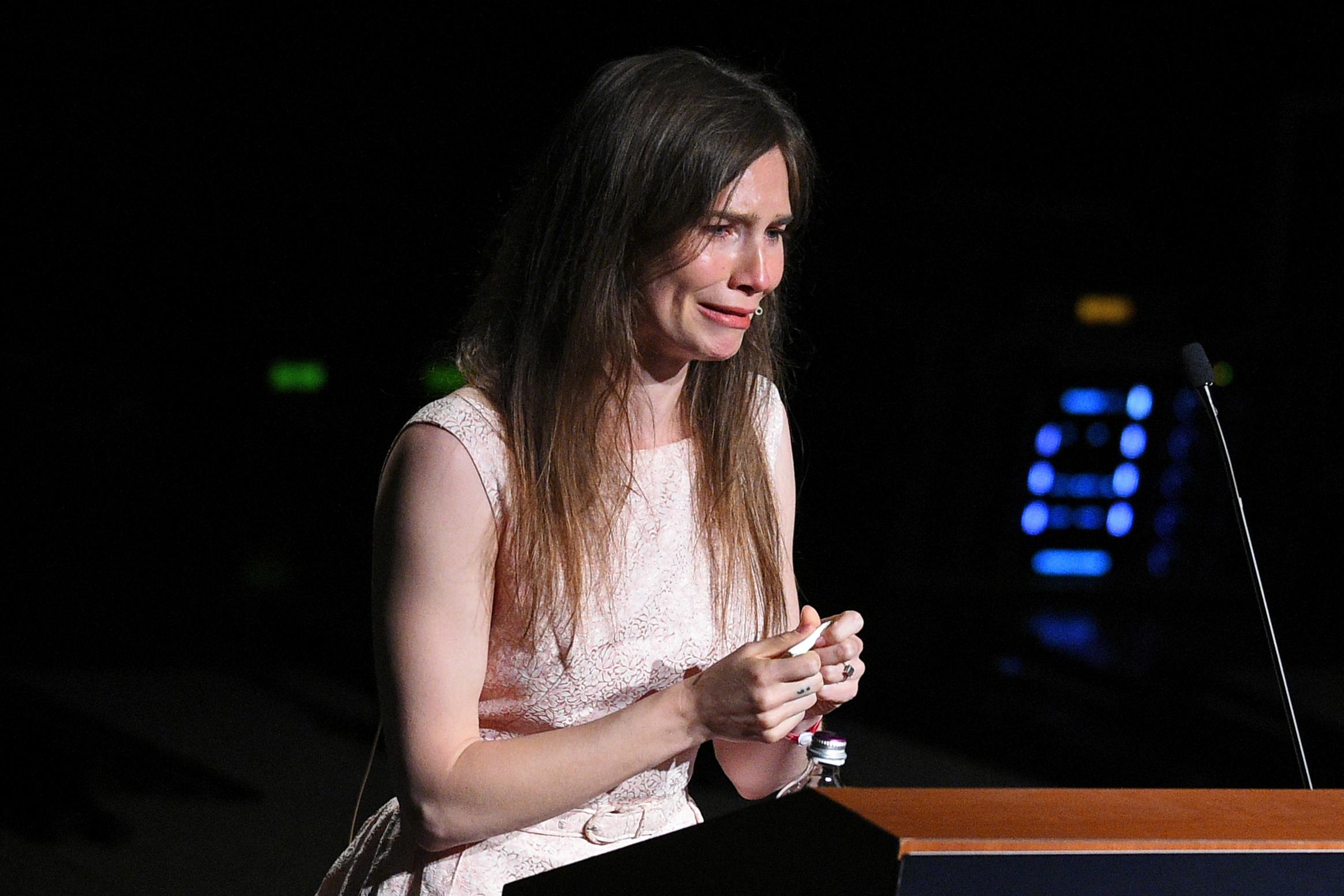 ROME (Reuters) – Amanda Knox, back in Italy for the first time since her 2015 murder acquittal, broke down in tears on Saturday as she relived her eight-year ordeal of trials and imprisonment, and the media frenzy surrounding it.

Speaking at a conference on criminal justice in the northern Italian city of Modena, Knox said she had considered suicide while in jail, and she blamed the media for its treatment of her and her trial, which was closely followed around the world.

“To the world, I wasn’t a suspect innocent until proven guilty, I was a cunning, psychopathic, dirty, drugged-up whore who was guilty until proven otherwise,” she told the audience.

“The prosecutors and the media created a story and a version of me that suited that story, on which people could attach all their fantasies, fears and moral judgments… the dirty, psychopathic man-eater Foxy Knoxy.”

Knox, now 31, returned to the United States after Italy’s top court annulled her conviction for the 2007 murder of her British flatmate in the town of Perugia, capping nearly a decade of courtroom drama during which she was twice found guilty.

The brutal stabbing of 21-year-old Meredith Kercher, alleged sex games and multiple trials provided fodder for tabloids on both sides of the Atlantic and inspired books and films.

Rudy Guede, originally from the Ivory Coast, is serving a 16-year sentence for the crime, but judges in the previous trials ruled he did not act alone.

“Lots of people think I am crazy to come here,” Knox said. “I’m afraid today, I am afraid of being harassed, of being trapped, and I am afraid that new accusations will be made just because I have come here to give my version of the facts.”

The Kercher family’s lawyer said her return to Italy was “inappropriate” self-promotion. But Knox insisted Kercher was her friend and her only intention was to draw attention to miscarriages of justice and the risks of an irresponsible media.

While definitively clearing Knox of the murder in 2015 due to insufficient evidence, the Rome court confirmed a previous three-year sentence given to her for falsely accusing Congolese barman Patrick Lumumba of the crime.

Knox said she had given the false statement because police had worn her down during “50 hours of interrogation, with no lawyer, in a language I spoke like a baby.”

In January, the European Court of Human Rights ruled Knox had not had a fair trial for the malicious accusation charge and ordered Italy to pay her 18,400 euros ($21,000) in damages and costs, well below the 2.7 million euros she had sought.

During her 40-minute speech on “Trial by Media”, Knox’s voice broke frequently and she paused to sip from a glass of water.

She lost control and wept openly when she recalled her father visiting her in jail and telling her there was no near-term prospect of her release.

She said she would like to meet again with the prosecuting magistrate, who she saw then as “a nightmare figure, a monster whose only goal was to destroy me for no reason,” but who she now realized was only trying to secure justice for Kercher.