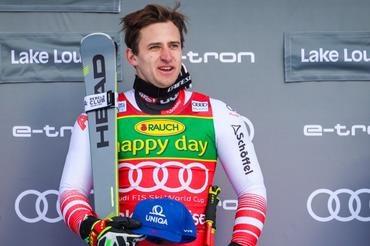 (Reuters) – Olympic champion Matthias Mayer continued a family love affair with the Canadian Rockies when he won the men’s World Cup super-G in Alberta on Sunday.

Competing a couple of hundred kilometers from where his father Helmut claimed Olympic silver in Calgary in 1988, Mayer charged down the Lake Louise mountain to triumph by nearly half a second.

The 29-year-old Austrian skied flawlessly, hitting speeds of 120 kph to end his run of four second-place finishes on the mountain.

For his sixth World Cup career victory — three in super-G and three in downhill — Mayer beat Italian Dominik Paris by 0.40 seconds, while Austrian Vincent Kriechmayr and Swiss Mauro Caviezel tied for third, 0.49 seconds off the pace.

Paris, the lead singer in a heavy metal band, had to settle for runner-up for the second successive day after being pipped in the downhill on Saturday.

Mayer is a double Olympic gold medalist, winning super-G in Pyeongchang in 2018 and downhill in Sochi in 2014.