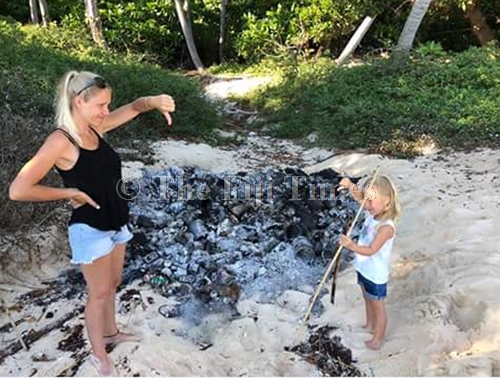 Josh Leppard's wife and child at the site where ruibbish from the cruise ship was found. Picture SUPPLIED

A FULL investigation is in progress into the alleged illegal dumping of rubbish into Yasawa waters from a tourist cruise vessel last week. The incident was highlighted by Australian tourist Josh Leppard who expressed his disgust over the rubbish that washed on to the shore of one of the beaches in the island chain.

A managing director of the cruise company said it took immediate action once the incident was brought to their attention through the social media post by Mr Leppard.

“The incident was reported to our Nadi office by a member of the public, at which time management informed the ship’s crew to take immediate action. “The ship was immediately diverted from her itinerary and crew were sent ashore to clean up the rubbish.”

She said the cruise company took the incident seriously as it went against their company policies.

“A full investigation is underway and disciplinary action will be taken as necessary.

The company, she said, had a strict garbage management plan and environmental policy in place.

The alleged illegal dumping at night was highlighted by Mr Leppard who was with his family at the time when they came across the rubbish that allegedly washed up on to the shore.

He claimed that he saw the cruise vessel dumping rubbish containing wine and beer bottles, broken glass and kitchen waste into the sea during the night.