‘All up’: Queen Elizabeth’s swans checked and counted 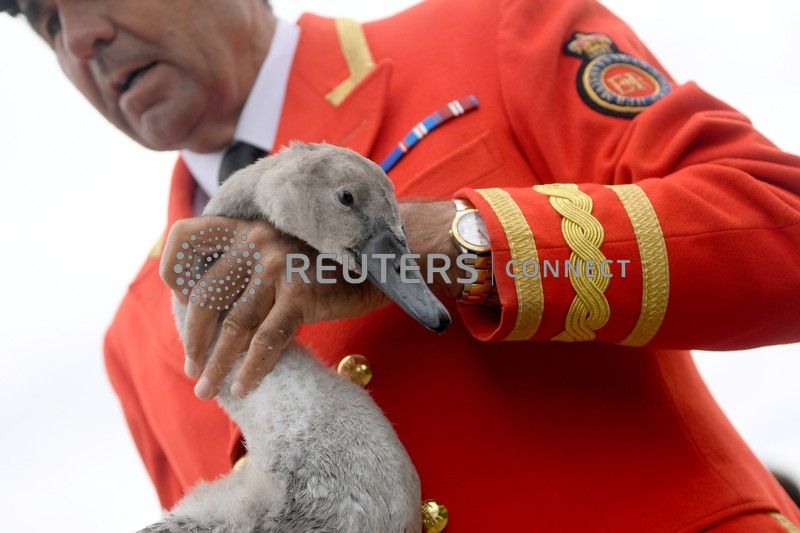 David Barber, The Queen's Swan Marker holds a cygnet as officials record and examine cygnets and swans during the annual census of the Queen's swans, known as 'Swan Upping', along the River Thames in London, Britain July 15, 2019. REUTERS/Toby Melville

Royal officials clad in scarlet outfits took to the River Thames in traditional boats on Monday for the annual “Swan Upping” ceremony, an 800-year-old tradition of counting the swans owned by Britain’s Queen Elizabeth.Teams in old fashioned skiffs will row up a stretch of the river over the next five days to carry out the annual census of the birds, shouting “all up” when they come across a mute swan and its family of young cygnets.

“We will lift the whole family out of the water, we will take them ashore, we weigh them, measure them and check them for any injuries,” David Barber, the queen’s Swan Marker, told Reuters. “You have a population of swans that hasn’t changed much since the mid 1800s.”

The ancient ceremony dates back to the 12th century when the English crown first claimed ownership of all mute swans, which have long curved necks, orange beaks and white feathers and were then considered a delicacy that would be served at banquets.

“These days it’s nothing to do with eating swan, it’s all about conservation and education,” said Barber, who has carried out his job for 26 years.

The river was much busier than in the original days of the swan upping and the birds, which are protected by law, were losing their natural nesting grounds, he added.

A high number were dying or having their nests destroyed as a result of dog attacks while fishing tackle also resulted in injuries. He said he would be pleased if they found about 100 cygnets this year.

The queen shares ownership of mute swans on the Thames with the old trade associations of the Vintners and Dyers who also join in the upping.

However, the monarch retains the right of ownership of all unmarked mute swans swimming in open waters, although this is mainly exercised on certain stretches of the Thames.

The Swan Uppers began their census-taking in Sunbury, west London, and will end at Abingdon Bridge in Oxfordshire to the west of the British capital on Friday.