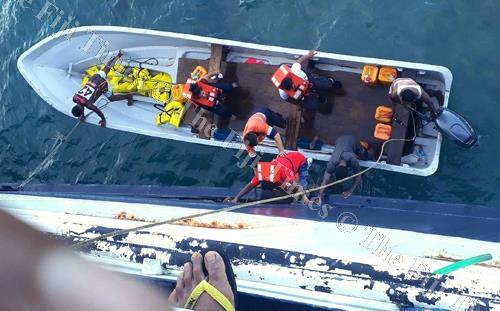 Passengers on the "Spirit of Altruism" helped onto fiber glass open boats to be ferried across to the waiting Spirit of Harmony. Picture: SUPPLIED/LEPANI BATABA

ALL 180 passengers who were on board the MV Spirit of Altruism which drifted on to the Cakau Davui Reef near Levuka were safely off loaded onto the Spirit of Harmony, says Maritime Safety Authority of Fiji chief executive officer John Tunidau.

He said MSAF had been in contact with vessel owners, Patterson Brothers Shipping Ltd soon after the incident occurred.

“The ship did not run aground, it suffered engine problems and drifted on to the reef,” he said.

Mr Tunidau said the ship owners confirmed they had despatched a second vessel as soon as the incident happened to begin rescue efforts.

“The ship owners were also on the scene and we are satisfied with the action they have taken.

“The Fiji Navy co-ordinated all rescue efforts. Two tugboats have been deployed to pull the Spirit of Altruism off the patch of reef.”

Mr Tunidau said while a marine notice cautioning small seagoing vessels against travelling in inclement weather had been issued, the same did not apply to larger ships.

“These are big vessels. It’s only the small vessels we need to stop. There was a directive given to smaller vessels to be careful of the weather. This was a big vessel with big engines but unfortunately incidents like this do happen. When we give a non-clearance, we give it to certain areas of Fiji and especially to smaller vessels.”