All Black McKenzie expected to be fit for Chiefs’ Super opener 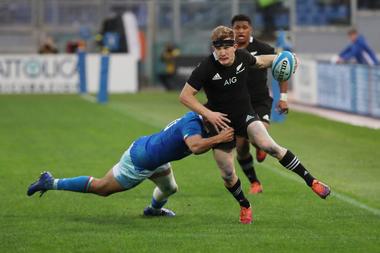 (Reuters) – New Zealand utility back Damian McKenzie is on track to return from a knee ligament injury ahead of the Waikato Chiefs’ Super Rugby season opener against Auckland Blues on Jan. 31, assistant coach Tabai Matson has said.

McKenzie, 24, ruptured his anterior cruciate ligament playing against the Blues in April and missed the Rugby World Cup in Japan, where New Zealand finished third after losing to England in the semi-finals.

“(He’s) running and will be doing tackling all the way through December, and will be available at the start,” Matson told New Zealand’s Radio Sport on Tuesday.

“It’s exciting to have a world class player of that calibre back in the mix for sure. It’s great news for him and for us and for New Zealand Rugby.

“He’s been one of our best for a long time. Nearly 80 games of Super Rugby … It’s frightening that he’s got a lot more to give.”

McKenzie’s return will come as welcome news for former Wales coach Warren Gatland, who signed a four-year deal to return to his hometown Chiefs in June.