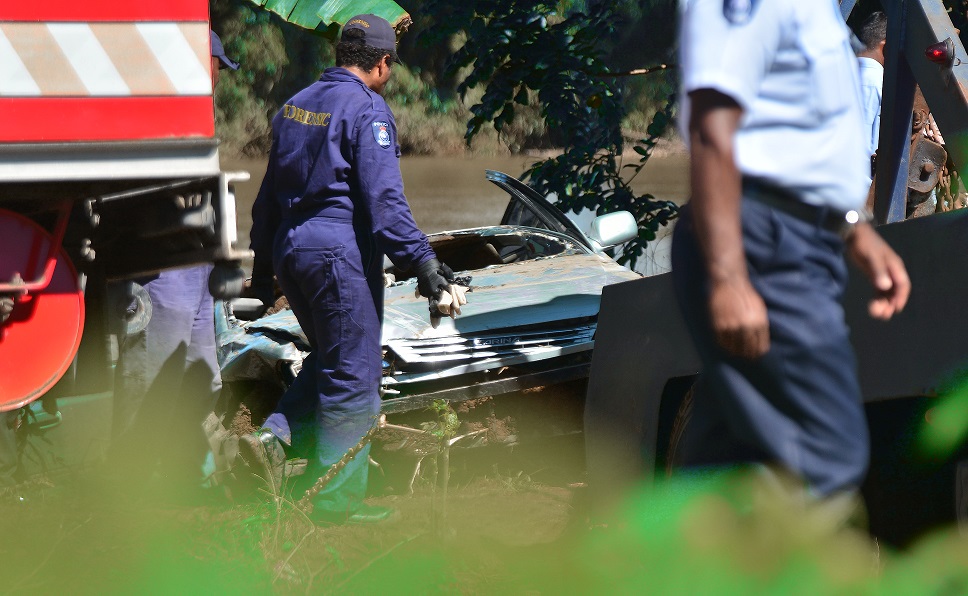 The Fiji Police Forensic team conducting a series of tests and investigations after retrieving the missing vehicle which plunged into the Rewa river last week Wednesday. Picture: JOVESA NAISUA

FROM the moment they received news of his disappearance, Tasleem Ali’s family started praying for him.

For six days they joined the search for the 18-year-old, never wanting to give up on the hope that he might still be alive.

But hope turned into grief midday yesterday when his body was retrieved from inside the vehicle he was driving when it plunged into the Rewa River last Wednesday.

More than 50 police officers, firefighters and navy divers were at the scene around 7am yesterday near Waidra in Baulevu outside Nausori.

His uncle, Sharif Dean, said family members did not give up on the search until he was found.

He said the body find would give the family closure.

“I met him few days before the incident happened,” he shared.

“Tasleem was an innocent boy who was very kind to everyone around him. We never gave up on praying for him when we received the news of what had happened to him that day.”

Another uncle, Affar Ali, 69, said he had never seen his nephew drive a car before.

“The only time I got to know that he had a driving licence was when the incident happened,” he said.

Another relative of the deceased, Mohammed Nadeem, thanked the Fiji Navy, Fiji Police Force and the National Fire Authority for working tirelessly over the past few days searching for his nephew.

“I want to thank them for their work in searching for my nephew’s body and car,” he said.

“On behalf of the family, I want to thank them. “For the past six days I was at the place where he went missing searching for the car and his body.”

Police handed over Tasleem’s body to his family yesterday and he was laid to rest at the Drekeinakelo Cemetery, just a few metres away from his home.

Tasleem is survived by his elder brother and mother.

The road death toll is 19 compared with 14 for the same period last year.