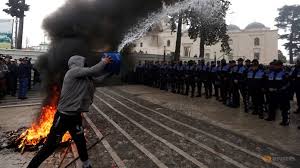 A supporter of the opposition party shouts slogans during an anti-government protest in front of the Parliament in Tirana, Albania, March 5, 2019. REUTERS/Florion Goga

TIRANA (Reuters) – Albania’s main opposition leader on Tuesday urged Prime Minister Edi Rama to call a snap election over allegations of corruption and vote fraud, as anti-government protesters rallied outside parliament. They burned portraits of Rama and threw firecrackers at the building, but the demonstration – the fourth against his administration since mid-February and […]