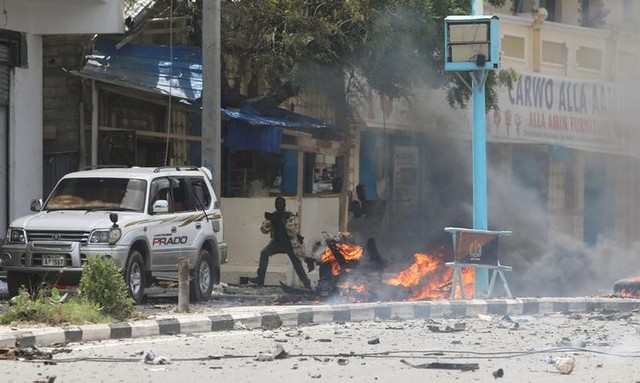 A Somali military officer carries his gun as he secures the scene of a suicide car bombing near Somalia's presidential palace in Mogadishu, Somalia July 7, 2018. REUTERS/Feisal Omar

A Reuters witness saw a heavy exchange of gunfire outside the building, which is also used by police. Smoke drifted from burning vehicles following a suicide car bombing close to the presidential palace and a second blast near the security building.

A spokesman for the Islamist group al Shabaab said it had carried out both bombings and said its fighters remained inside the government security building.

“Al Shabaab remotely exploded the second car after they got out of it,” he said, adding that a heavy exchange of fire continued at the occupied building.

In the moments following the blasts ambulance sirens were heard while announcements were made via loudspeaker to help clear the roads.

At least 17 people were wounded in the two bombings, said Abdikadir Abdirahman, director of the Amin Ambulance emergency service.

Al Shabaab wants to topple Somalia’s Western-backed central government, expel the African Union-mandated peacekeeping force AMISOM and establish a government based on its own strict interpretation of Islamic sharia law.

Somalia has been gripped by violence and lawlessness since the toppling of dictator Mohamed Siad Barre in the early 1990s.