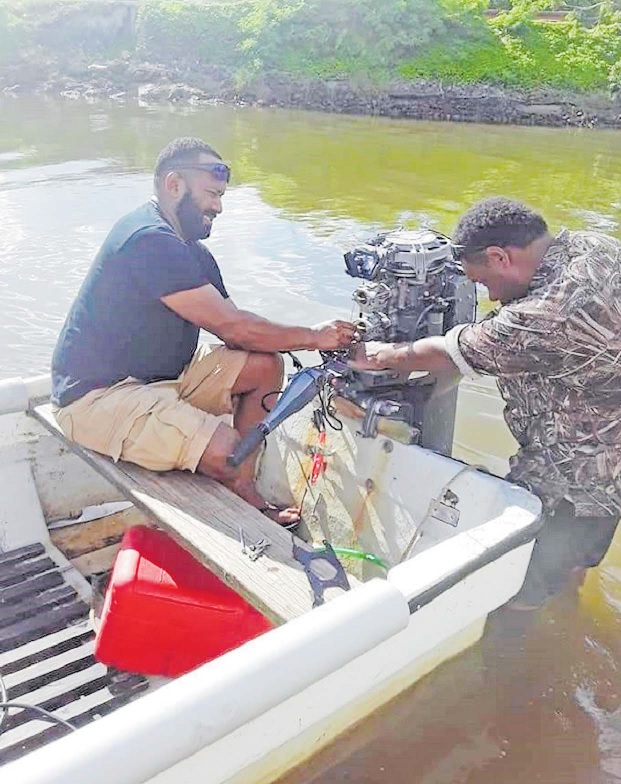 Aisea Vasu, left, examines a boat engine with the owner. Fibreglass boats are one of the most important, if not the only mode of trasportation, for villagers in remote areas. Picture: SUPPLIED

He has certainly come a long way from Komo Village, Lau, where his father was a teacher.

Learning the finer points of vehicle engines and what makes them tick has taken him to some of the country’s biggest resorts and today provides a means to put food on the table.

“From Komo my dad was transferred to Navukailagi District School then to Gau Secondary School and then St John’s College, Levuka,” the 35-year-old said.

“After I completed high school, I enrolled at CATD (Centre for Appropriate Technology Development) Nadave and studied automotive engineering for two years from 2005 to 2006.

“After I graduated in 2007, I sent my applications around and was lucky to be given the job of mechanic at Plantation Island Resort in Malolo.

“It was a new experience because I was working in Malolo which was a new environment and I was far away from home.

“I was missing my parents and tried to stay disciplined as it was my first job.

“I put all my effort and time into my work.

“My work at Plantation was repairing anything and everything that had an engine – the tractor, digger, ten-wheeler truck, outboard engine, you name it.”

“Working in a resort is challenging. There are many ups and downs, friends come and go, but I managed to make friends with some guests which was good.

“I left Plantation in 2016 after I got a better offer from Warwick Resort in Korolevu.

“When I started at the Warwick, it was easy for me to mingle with staff and heads of departments because of my experience at Plantation.

“I really enjoyed the job too because it was in Korolevu and I could sometimes spend the weekend at my parents’ place in Namadi.”

When COVID-19 hit and borders were closed, Warwick Resort, like most others, had to scale down operations and staff were sent home.

“I was one of the unlucky ones and when I reached home I was lost because I never believed that one day the hotels in Fiji would be closed.

“After a few weeks at home, I began to think about how I could use my skills and experience as a mechanic to provide for my family. “I posted on my Facebook page that I was available to repair trucks, outboard engines, tractors, diggers and cars.”

Mr Vasu said the response he received was overwhelming.

“I got calls from all the four corners of Viti Levu and I always made sure I was able to do the work and that my prices were reasonable.”

Mr Vasu said he was thinking of setting up his own workshop at home and try to create jobs for some of the youths in his area.