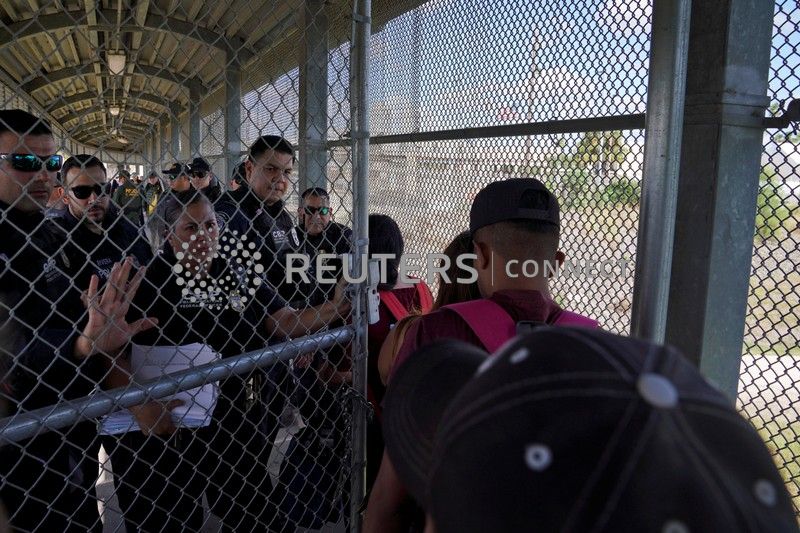 FILE PHOTO: U.S. Customs and Border Protection agents open the gates to the port of entry so that asylum seekers who had a court date that day can either attend it or reschedule it, as a group of migrants, who returned to Mexico to await their U.S. asylum hearing, block the Puerta Mexico international border crossing bridge to demand a speedier asylum process in Matamoros, Mexico October 10, 2019. REUTERS/Veronica G. Cardenas

WASHINGTON (Reuters) – Airbnb, Chobani, Western Union and a dozen other companies are urging the withdrawal of a Trump administration proposal to slow down the work permit approval process for asylum seekers.

The companies – joined by Uniqlo, Ben & Jerry’s, DoorDash and others – spoke out against a recently proposed regulation in a letter sent to U.S. Citizenship and Immigration Services (USCIS) on Friday.

“We are concerned that the proposed rule would hurt our ability to attract and retain talent,” they wrote. “Many of the undersigned companies already have asylum seekers in our workforce and many will have need to hire members of this population in the months ahead.”

The proposed regulation is part of a broader effort by the Trump administration to crack down on asylum seekers. The president and his top officials have argued that most migrants who request asylum in the United States lack valid claims and seek the status for economic reasons.

Asylum seekers can apply for a work permit 150 days after making a claim for protection in the United States. Under existing regulations, immigration officers must approve or deny such a request within 30 days.

But the administration argues the requirement for a quick turnaround monopolizes resources that could be used elsewhere. In September, USCIS, the agency that handles the applications, proposed a regulation https://www.federalregister.gov/documents/2019/09/09/2019-19125/removal-of-30-day-processing-provision-for-asylum-applicant-related-form-i-765-employment to eliminate the 30-day deadline.

A USCIS spokeswoman said she could not comment on the companies’ letter due to the ongoing regulatory process. Acting USCIS Director Ken Cuccinelli said in September the proposed change would allow for better vetting and security procedures.

Adding to the barriers for asylum seekers, the administration announced https://www.federalregister.gov/documents/2019/11/14/2019-24366/us-citizenship-and-immigration-services-fee-schedule-and-changes-to-certain-other-immigration on Friday in a separate proposal that it will publish a regulation that would impose a $50 fee on certain asylum applications.

The charge would be the first of its kind for U.S. asylum requests. An analysis by the U.S. Department of Homeland Security found that only three countries – Australia, Fiji and Iran – charged a fee for initial asylum applications.

At the same time, the administration proposed raising fees for U.S. citizenship applications to $1,170, an 83% increase.

Christopher Miller, an activism manager with Ben & Jerry’s, said in a statement that the company opposed the fee changes.

“These policies are disappointing but not surprising from an administration that is doing everything it can to build walls and keep people out,” he said.