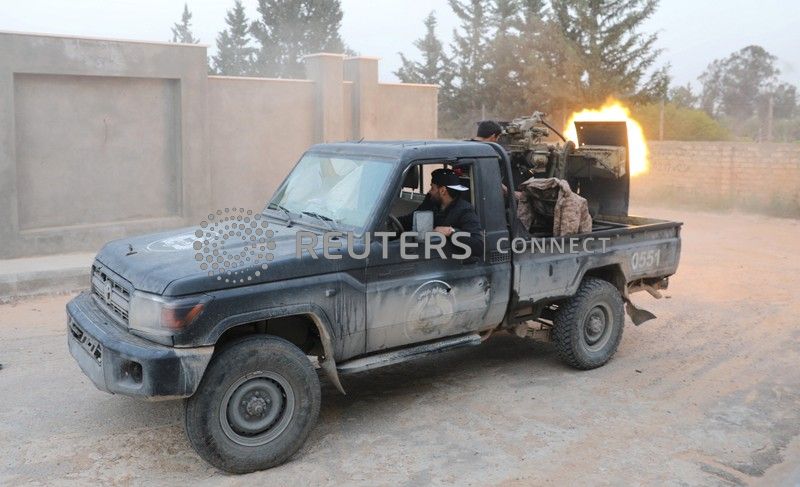 TRIPOLI (Reuters) – Several air strikes and explosions shook the Libyan capital Tripoli overnight, residents said, in an escalation of a two-week offensive by eastern forces on the city held by the internationally recognised government.

A Reuters reporter and several residents said they saw an aircraft circling for more than 10 minutes over the capital late on Saturday, and that it made a humming sound before opening fire on several areas.

An aircraft was heard again after midnight, circling for more than ten minutes before a heavy explosion shook the ground.

It was not clear whether an aircraft or unmanned drone was behind the strike, which triggered heavy anti aircraft fire. Residents had reported drone strikes in recent days, but there has been no confirmation and explosions heard in the city centre this time were louder than in previous days.

Residents counted several missile strikes, one of which apparently hit a military camp of forces loyal to Tripoli in the Sabaa district in the south of the capital, scene of the heaviest fighting between the rival forces.

Authorities closed Tripoli’s only functioning airport, cutting air links to a city of an estimated 2.5 million residents. The airport in Misrata, a city 200 km to the east, remained open.

The Libyan National Army (LNA) force loyal to commander Khalifa Haftar started an offensive two weeks ago but has been unable to breach the government’s southern defences.

If a drone strike was confirmed this would point to more sophisticated warfare. The LNA has so far mainly used ageing Soviet-made jets from the air force of Muammar Gaddafi, toppled in 2011, lacking precision firepower and helicopters, according to residents and military sources.

In the past the United Arab Emirates and Egypt have supported Haftar with air strikes during campaigns to take eastern Libya. Both countries flew air strikes on Tripoli in 2014 during a different conflict to help a Haftar-allied force, U.S. officials said at the time.

Since 2014 the UAE and Egypt have provided the LNA with military equipment such as aircraft and helicopters, helping Haftar gain the upper hand in Libya’s eight-year conflict, U.N. reports have established.

The UAE even built an air base in Al Khadim in eastern Libya, one such report said in 2017.

The air strikes, which were also filmed by residents in video posted online, came after a day of heavy clashes in southern districts, with shelling audible in the city centre.

The violence spiked after the White House said on Friday that U.S. President Donald Trump spoke by telephone with Haftar earlier in the week.

The disclosure of the call and a U.S. statement that it “recognized Field Marshal Haftar’s significant role in fighting terrorism and securing Libya’s oil resources” has boosted the commander’s supporters and enraged his opponents.

Western powers and the Gulf have been divided over a push by Haftar’s forces to seize Tripoli, undermining calls by the United Nations for a ceasefire.

Both sides claimed progress in southern Tripoli on Saturday, but no more details were immediately available.

On Friday, two children were killed in shelling in southern Tripoli, residents said. The fighting has killed 227 people and wounded 1,128, the World Heath organization (WHO) said before the air strikes.

On Thursday, both the United States and Russia said they could not support a U.N. Security Council resolution calling for a ceasefire in Libya at this time.

Russia objects to the British-drafted resolution blaming Haftar for the latest flare-up in violence when his LNA advanced to the outskirts of Tripoli earlier this month, diplomats said.

The United States did not give a reason for its decision not to support the draft resolution, which would also call on countries with influence over the warring parties to ensure compliance and for unconditional humanitarian aid access in Libya.