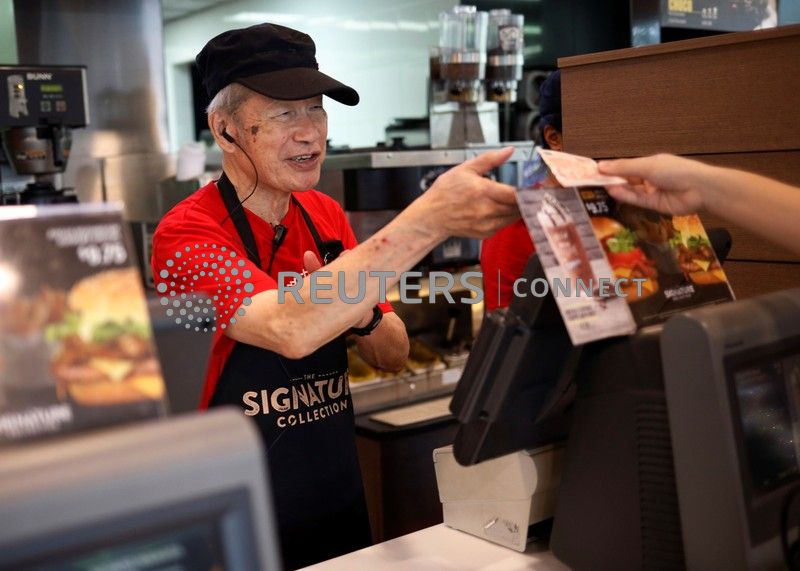 SINGAPORE (Reuters) – Mohsin Khan is still at his job repairing aircraft hydraulics parts although the Singaporean turns 75 in a couple of months.

His technical skills are prized by his employer, and as his eyesight deteriorated slightly, the company invested about two years ago in a S$11,000 (£6,273) laser-marker machine that uses a large screen to help emboss numbers in tiny font on metal plates.

About 80 percent of the money was subsidised by Singapore’s ‘job-redesign’ grant, one of several government schemes to help companies with older staff. For his employer, Aerospace Component Engineering Services (ACE Services), the grant helps retain workers like Khan whose skills are difficult to replace.

Khan says he remains employed and paid a salary long after his contemporaries had retired. “I didn’t want to be idling at home – doing nothing and spending money,” he said.

Tiny Singapore, one of the wealthiest nations in Asia, is seen as a test bed for how governments tackle ageing issues. Its population is the second-fastest ageing in the world after South Korea, according to U.N. figures, and the global financial hub is growing more dependent on its older residents as birth rates fall and foreign labour is restricted.

“Governments need to look after the needs of their ageing population, and enable older workers to work longer and stay productive,” Singapore’s Finance Minister Heng Swee Keat said this week.

More than 650 companies in Singapore have made use of the up to S$300,000 ($221,174) job redesign grant since 2016. Other schemes include wage offsets to employers of older workers and a grant to adopt progressive age management practices.

In most countries, it is left to the private sector to try to keep the experienced workers they need, although Asia’s two other rapidly ageing nations – Japan and South Korea – do provide grants and subsidies to firms for their older workers.

Philip O’Keefe, a lead economist at the World Bank, said Singapore – where the government has a reputation for innovation and long-term planning – is “a very interesting laboratory”.

He said Singapore’s multi-cultural society, compared with South Korea and Japan, and sizeable foreign workforce made the country a test case that would be watched by others. Other experts say Singapore also has the advantage of its small size and the fiscal space to try different incentives.

Suffering from high staff turnover, Life Cleaning Pte was on the hunt for equipment that would reduce the physical burden on its workers, most of whom are 50 to 70 years old, said Roy Tan, a senior business development manager at the Singapore company.

It used the government grant to buy cleaning equipment for high surfaces, fitted with a camera and screen, making it less dangerous for older staff who would have had to climb scaffolding previously.

A ride-on cleaner, which allows the user to drive on a cart fitted with sweepers, meant its workers spent less time walking.

Tan said his employees used to grumble about “leg pain, back pain, everywhere pain” but now they don’t complain anymore.

Another investment was a battery-operated cart to move heavy garbage bins. Lee Thian Kok, a 67-year old employee, says he has been able to complete his tasks a couple of hours earlier since he started driving the cart a few months ago.

“I used to push the bins with my bare hands which took a lot more effort,” Lee said.

The city-state, where the retirement age is 62, requires companies to offer eligible employees the option of continuing to work until they are 67 years old.

Some companies such as global insurance firm Prudential <PRU.L> have scrapped the retirement age for their Singapore employees. Training for managers at Prudential now includes how to have conversations with employees regardless of age.

“There will be situations like: how do I deal with someone who is not performing and who is like my parent?” said Sheela Parakkal, the chief human resource officer at Prudential Singapore.

The employment rate for permanent residents and Singaporeans 65 and over – the so-called pioneers who lived through the end of British rule and the island’s break with Malaysia in the 1960s – reached 27 percent last year from about 16 percent a decade ago.

Besides the government schemes and employers looking to retain workers, many older people look for jobs after retirement because Singapore is often ranked as the world’s most expensive country and life expectancy is close to 83 – the third highest in the world.

Many residents complain the government’s retirement savings scheme does not provide enough money.

“If I don’t work, where will my income come from?” said 71 year-old Mary Lim, one of many elderly cleaners earning a meagre wage clearing up to 400 plates a day at a foodstall in Singapore’s Chinatown.

“If I stop my work, how will I survive?”

The government’s Central Provident Fund has won plaudits for the way it enlists citizens to put aside money to fund their retirement, healthcare and housing costs but accounts run dry after low-income earners spend on medical bills and buy a public housing apartment.

Lim said her “biggest fear” was that one day she won’t “have strength left” to do her job.

Meanwhile, Khan’s employer, ACE Services, is concerned about losing its experienced staff, with 10 of its 47 employees over 50.

Brian Hunter, the general manager, said work at the company was highly skilled and it took a long time to train staff. It has also grown difficult to attract younger staff who are drawn to jobs in banking and technology.

The company’s policies, such as flexible working hours, are already bearing fruit: attrition rates have dropped from five workers per year in 2016 to three currently.

“For us to be able to retain the older skills, it is very important to us,” Hunter said.