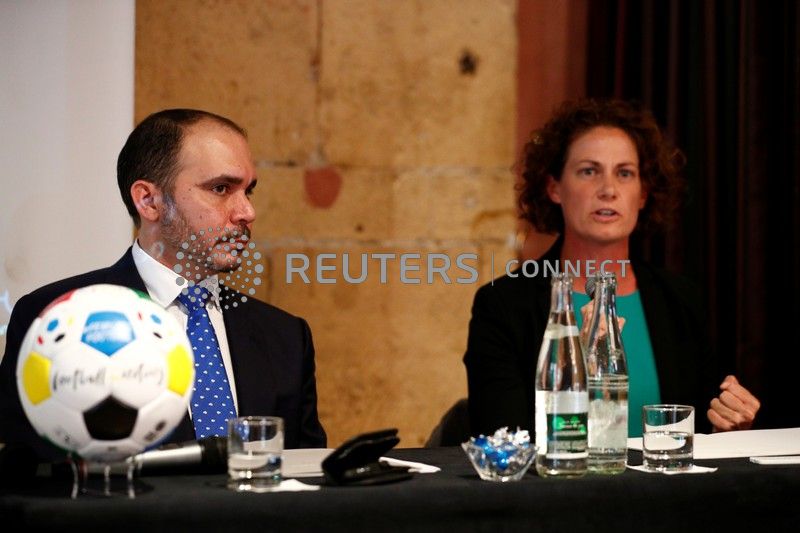 LYON, France (Reuters) – The coach of the Afghanistan women’s soccer team said on Wednesday she was disgusted with FIFA and its president Gianni Infantino for not taking action earlier and more rigorously to investigate an abuse scandal that engulfed soccer there.

The former AFF president, Keramuddin Keram, has not yet responded to the ban and the AFF could not be immediately reached for comment.

FIFA began its investigation in December into the alleged abuse of at least five Afghan female soccer players between 2013-18. However, the team’s coach, Kelly Lindsey, said she and the players had raised concerns to FIFA and the Asian Football Confederation much earlier but were rebuffed.

“It’s disgusting that there is no structure to investigate something like this, that there’s no system yet. You’re told over and over again ‘Well, you’re not going through the system.’ There is no clear system,” Lindsey told Reuters at the launch of “Fearless Football”, an initiative set up by Jordan’s Prince Ali Bin Al Hussein to eliminate abuse in the women’s game.

“Even when you put in a report you get nothing back. Nobody responds. You can send it through all layers of AFC and FIFA -you’ll get nothing back,” said Lindsey, an American.

In response to her comments, a FIFA spokesperson told Reuters in an email: “In early 2018, FIFA was made aware of sexual abuse allegations in Afghanistan football and immediately began to investigate these serious matters in a way that would ensure… the safety and security of those abused and their families.”

The spokesperson added that they were working with United Nations human rights agencies on the matter.

Afghan President Ashraf Ghani ordered an investigation after Britain’s Guardian newspaper reported in November that senior figures linked to the women’s team alleged that some players had been molested by federation officials. The AFF has previously called the allegations “groundless”.

Lindsey, who first learned of the abuse when on a training camp with her players around February 2018, said neither she nor her staff had been asked to meet with FIFA to coordinate on their investigation.

When asked what she would say to Infantino, re-elected unopposed last month, if she met him, the 39-year-old said: “I’m disgusted by him and I would say to his face. I’m disgusted that this is the response that was given to a case like this.

She said she had lost respect for the FIFA process on such issues and hoped the body was working to come up with a better system, adding, “They cannot continue like this and just let players, coaches, referees be abused behind the scenes and brush it under the rug.”

Meanwhile, Lindsey said the women involved in the case were now in hiding having been resettled, forced to learn new languages and feared for their lives.

The launch of Wednesday’s campaign was held in a hotel in Lyon, not far from where fans gathered in an official FIFA fan park ahead of the second women’s World Cup semi-final between Sweden and the Netherlands.

The 24-team tournament has been arguably the most competitive in the history of the women’s game, however Lindsey said she was bothered by the event slogan – “Dare To Shine”.

“‘Dare to shine’ and then you’re letting this darkness and these things behind the scenes sit and brush them under the rug and let these individuals, these human beings suffer in a game that we all love?”

Former FIFA vice president Prince Ali set up the “Fearless Football” petition through his Association Football Development Programme Global group. The aim of the campaign is to get governing bodies to put in place a zero-tolerance policy in regard to the mistreatment of women and girls.

The petition has been signed by former footballers such as Robert Pires, Jamie Carragher, Kelly Smith and Gerard Houllier.

Having experienced life in FIFA’s executive committee during the corruption scandals under the body’s former president Sepp Blatter, the Jordanian said that the body had not done enough to tackle human rights abuses in the game.

“When I was an executive committee of FIFA all the talk was about corruption in the sport, which obviously is a huge, huge issue,” he told Reuters.

“But this subject was never broached. And looking into it, it’s really endemic and it’s not just in Afghanistan but it’s been going on in places around the world.”