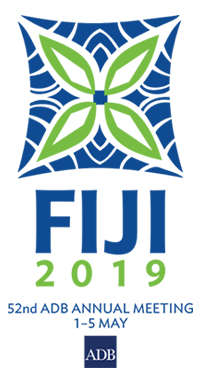 NADI, 02 MAY 2019 (ADB) – The Asian Development Bank (ADB) will expand support to help the Pacific islands build stronger resilience to global economic shocks, disasters, and climate change, ADB President Takehiko Nakao said today on the opening day of the 52nd Annual Meeting of ADB’s Board of Governors in Fiji.

Speaking to Pacific Developing Member Country (DMC) Governors, Nakao said the Annual Meeting in Fiji is a “historic” occasion, since it is the first held in a Pacific DMC and comes at an important time for the sub-region.

“We now have the opportunity to highlight the unique development challenges and significant development progress throughout the region,” he said. “During this Annual Meeting, the main message I want to share with you, as well as with other Governors, development partners, the private sector, and civil society, is that ADB is scaling up our operations in the Pacific.”

Nakao also took the opportunity to congratulate Niue on becoming the 68th member of ADB. The island nation officially joined ADB in March, making it ADB’s 15th DMC from the Pacific islands.

The Republic of the Marshall Islands Minister for Finance, Banking, and Postal Services, Brenson Wase, co-chaired the meeting and urged international partners to work with DMCs in the region to protect the health of the Pacific Ocean, build resilience against the impact of climate change and disasters, and overcome the constraints of geographical isolation and dispersed populations.

“Despite these and other challenges, development in the Pacific continues,” Wase explained at the meeting.

“Our people are living longer, healthier, and more productive lives compared to when each country joined ADB.”

First, under ADB’s Strategy 2030, ADB will introduce differentiated approaches to development assistance in small island states and countries with fragile and conflict-affected situations. This includes key areas such as climate change, disaster risk management, project preparation, procurement, and capacity building across the region.

Second, ADB is scaling up its financial support for the Pacific. In the last three years (2016–2018), the total lending and grant commitments amounted to $1.5 billion as compared to $700 million in the previous three years (2013–2015). Donors’ support contributed to an increase in the Asian Development Fund, providing grant financing to ADB’s lowest income DMCs. Annual base allocations were increased from $6 million to $13 million for 2019 and 2020, an important boost in concessional financing for many countries in the Pacific.

Third, ADB is actively mobilizing co-financing in climate change, and is the largest mobilizer of funds for the Pacific from the Green Climate Fund, from whom ADB has secured more than $130 million in grant funding.

Fourth, Nakao said ADB would also do more to promote innovation in the Pacific. ADB’s Pacific Department pioneered the use of contingent lines of credit to provide financing for response and recovery efforts in the immediate aftermath of disasters. ADB is also working with its Pacific DMCs to design innovative projects for renewable energy, water supply systems, regional vaccination programmes, as well as to introduce new ICT applications in e-health, e-education, and e-governance. To help attract private financing, the innovative use of guarantees under ADB’s new Pacific Renewable Energy Programme, approved in April, will reduce investment risks for independent power producers in the region.

Fifth, ADB is expanding its physical presence in the Pacific islands, Nakao said. Over the past three years, more than 25 new staff positions have been allocated to the Pacific Department in headquarters, in field offices, and in the new offices in 11 Pacific DMCs.

Nakao highlighted the need to strengthen ADB’s partnership with key development partners such as Australia, New Zealand, Japan, the European Union, the World Bank, and the Pacific Islands Forum.

ADB is committed to achieving a prosperous, inclusive, resilient, and sustainable Asia and the Pacific, while sustaining its efforts to eradicate extreme poverty. In 2018, it made commitments of new loans and grants amounting to $21.6 billion. Established in 1966, it is owned by 68 members—49 from the region.