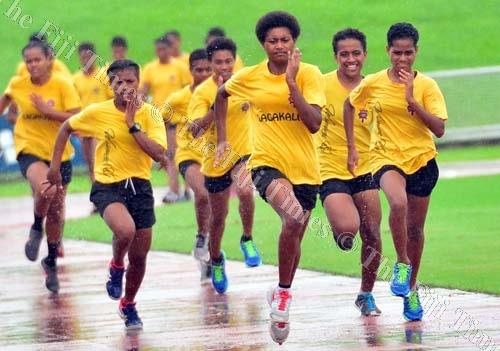 DEFENDING the title will be a titanic challenge for the Coca-Cola Games girls’ reigning champion Adi Cakobau School.

The Waimanu athletes braved the wet condition at the ANZ national stadium yesterday in readiness for next weekend’s Fiji Finals.

Head coach Antonio Raboiliku said all teams would be gunning to snatch the title from ACS.

“When you defend your title it’s like you win two times,” said Raboiliku.

“This means you really need to work harder and actually for us we know it’s not an easy job knowing the competition has moved up.

“Ever since Jasper took the title in 2013 the approach for Coca-Cola Games has really changed.”

Raboiliku said Jasper and St Joseph’s have recruited professional coaches which would make the competition exciting.

“I know Jasper went back to their drawing board last year and did very good off season. They brought in level 4 athletics accredited coach and that alone speaks volume how much they are preparing for this year.

“St Joseph’s did the same with their off season and they have a very respected coach with them Bola Tafoubola with Banuve and Sisilia also helping out.

“For us we just have the coaches from last year, actually just the teachers, we’re just working hard each day.

“One big challenge is to defend the title and we are going through day by day, week by week, hoping we put our cards right come the games day,” he said.

Raboiliku created history when he guided Jasper to win its first girls title in 2013 and later helped ACS to win last year.

The Coca-Cola Games will be next weekend.