About 9,000 migrants on Greece’s Lesbos move into tent camp after fire 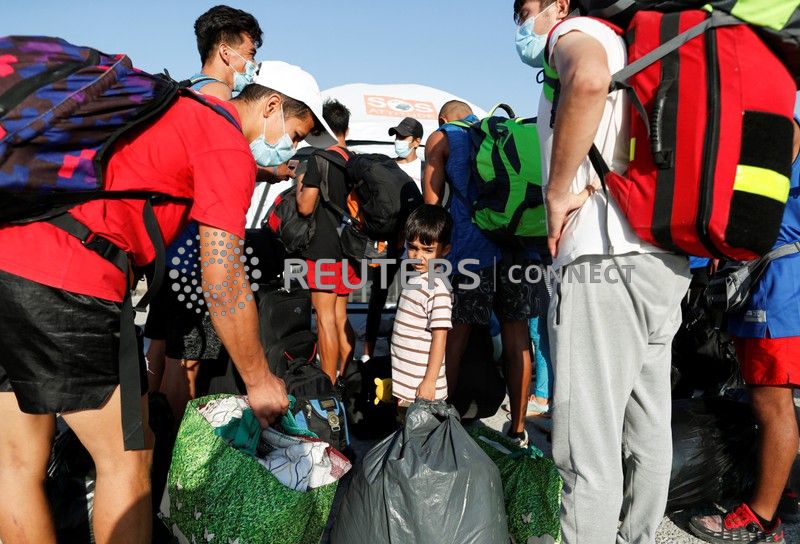 Refugees and migrants, from the destroyed Moria camp, line up to enter a new temporary camp, on the island of Lesbos, Greece, September 19, 2020. REUTERS/Yara Nardi

LESBOS, Greece (Reuters) – Thousands of asylum-seekers have moved into a new temporary facility on the Greek island of Lesbos, government officials said on Saturday, 10 days after a fire destroyed the Moria camp.

The fire that broke out in Moria on Sept. 9 left over 12,000 people, most of them refugees from Afghanistan, Syria and various African countries, without shelter, proper sanitation or access to food and water. No one was hurt in the blaze.

About 9,000 people had been resettled in the new tent camp, set up by authorities at Kara Tepe near the port of Mytilene, by Saturday morning. A few hundred had also moved into a community centre managed by a non-governmental organisation.

Those entering the camp were being registered and tested for COVID-19. At least 214 were placed in quarantine after positive tests.

Traffic was returning to normal on the roads, where thousands of migrants had camped for days after the fire, and stores in the area started reopening.

Greek police launched an operation on Thursday to speed up the resettlement of migrants. Many had been reluctant to enter the temporary camp as they had hoped to leave Lesbos after the fire and reach other European countries.

Authorities believe the fire that gutted the notorious for its living conditions Moria camp was started by migrants following a dispute over COVID-19 quarantine measures at the facility after dozens of asylum-seekers tested positive. Six people have been arrested and charged with arson.