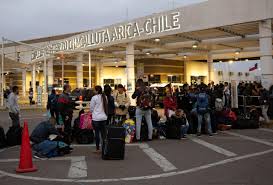 People are seen in a row at the Chacalluta border crossing between Chile and Peru, in Arica, Chile, June 19, 2019 Picture taken June 19, 2019. REUTERS/Stringer

COMPLEJO CHACALLUTA, Chile (Reuters) – Some 200 mostly Venezuelan migrants fleeing poverty at home remained stranded on the Peru-Chile border on Thursday after being refused entry to Chile earlier this week.

Chilean Interior Minister Andrés Chadwick told the local press that only “those who meet the legal requirements, regardless of origin and nationality, will enter the country.”

Latin America is in the grip of an immigration crisis, with millions of people from Central America and Venezuela driven by poverty and violence to seek refuge in other countries while the United States urges governments to reduce the flow of asylum seekers arriving at the U.S. border.

A precise count of the number people at the border crossing of Chacalluta in the extreme north of Chile was not available, but immigrant support organizations estimated the number at 200.

“We have a relative in Chile,” said Venezuelan Aida Guacara, adding that she “would not know what to do” if authorities do not allow her to enter the country. Chile, a major world mining power, has a much stronger economy than crisis-stricken oil-producer Venezuela.

“We’ve already been traveling for more than eight days. We came by land,” she added.

The director of the Jesuit Migrants Service of Chile, José Tomás Vicuña, said on social media that migrants stuck in the area, some of them children, have begun to have health problems.

“We have not eaten since yesterday (Wednesday),” said another woman, who said she was hoping to enter Chile soon.