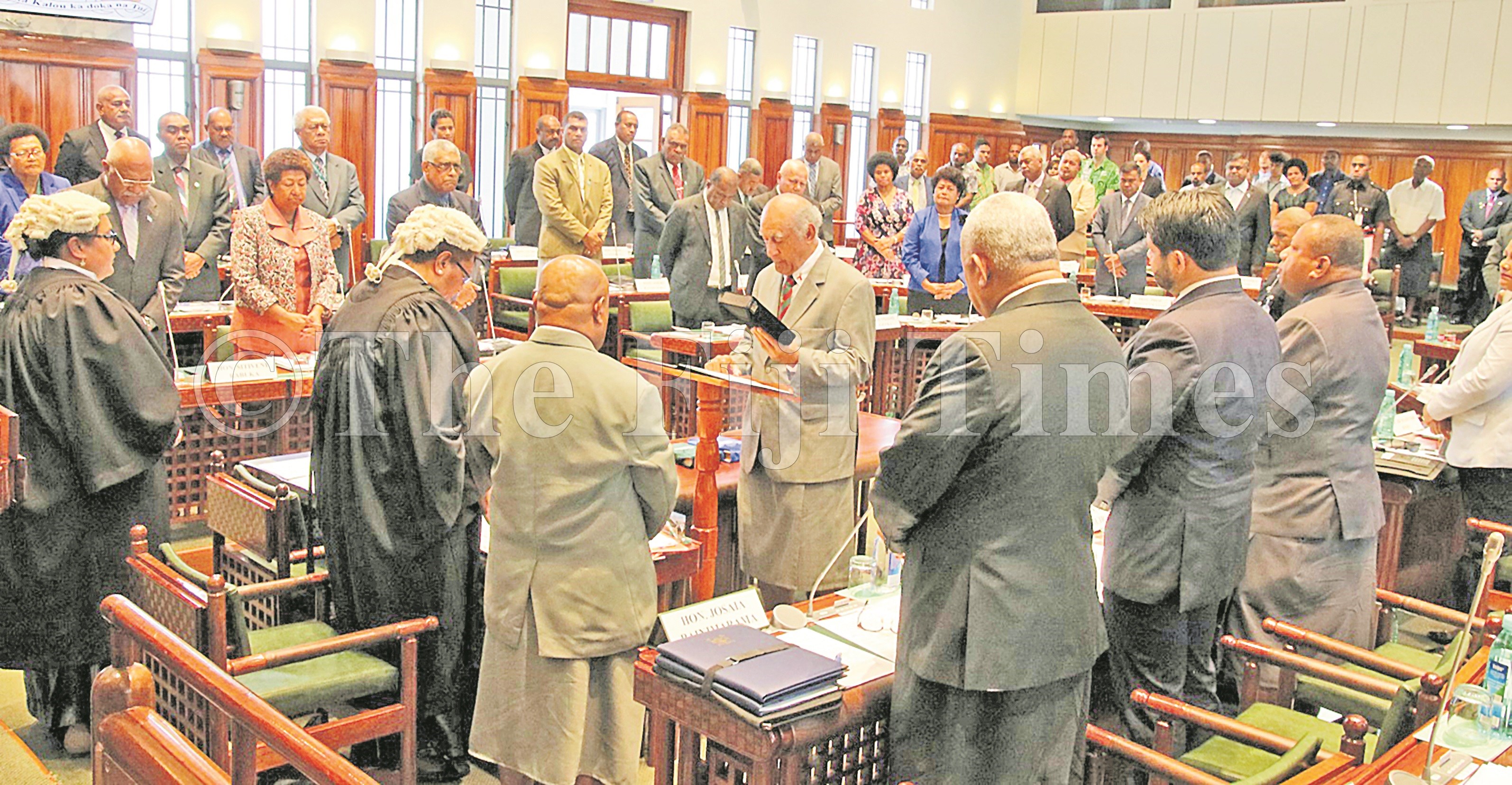 Members of the Parliament during the swearing in ceremony of the new Speaker Ratu Epeli Nailatikau. Picture: PARLIAMENT OF THE REPUBLIC OF FIJI.

This week, I watched documentaries on the iconic Nelson Mandela plus Mahatma Gandhi and was struck by the strength and resolve of these leaders. Their strength came by unifying people and not dividing them, a lesson all politicians can learn from.

Strength lies in being able to encourage opinions from stakeholders and listen objectively to all spectrums of society alas this is something missing today.

I have a proposal to share urgently; as the people begin too descend into greater poverty day by day. I speak with love in my heart as we have just completed delivering 5000 packs of meals in four weeks to the poor and disadvantaged, unfortunately we could have delivered 20 times extra the need is so great.

There now needs to be a collective approach in leading the nation as thousands of jobs are lost, tourism is closed and unemployment is getting out of control.

Unfortunately, poverty leads to more burglaries; break-ins and opportunist crimes as the situation gets more desperate for individuals and families.

We don’t have the luxuries of countries that have contingency plans and have budgeted for such situations. For example my brother was laid off for three months in Australia, but to assist him, he was given in Fijian $1000 a week, but here in Fiji unfortunately the Government cannot assist so generously.

This is certainly not a criticism in any way but an observation, where we can learn from this and move forward with a new and united plan of action.

There is a need for all political parties and citizens alike to come together as this severe downturn cannot be fixed by a few, it will take a huge effort of many.

To say I am worried about the state of the nation at present is an understatement, but we must all join hands and let go of animosity and fill our hearts with love and determination.

Here are three main areas which need urgent attention, the first being;

The economy is going to be in tatters if something is not done urgently and with respect to Mr Aiyaz Sayed-Khaiyum; he needs assistance to look at policies and implement new ideas during this time.

I am proposing a six-person team consisting of the highly experienced former Reserve Bank governor and most senior economist in Fiji Savenaca Narube. Then we have the most well researched and read Professor of Economics in Fiji, Biman Prasad.

They can be supported by three leading business persons offering a wealth of experience.

This team can implement fresh new strategies now to save the country from further decline and also gain respect and trust.

The tourism sector is decimated, and with respect to Mr Koya, he cannot revive it alone. Again a team is needed and we have Bill Gavoka, who has so much experience and is the former chairman of Fiji Visitors Bureau.

The third member of the team is Lenora Qereqeretabua whose family has been involved with tourism all their lives.

They can be supported by three operators big and small from the tourism sector.

The team can work together in implementing new initiatives urgently needed in this collapsed market.

Differences are required to be put aside and true patriotism for the nation is needed therefore Voreqe Bainimarama, Sitiveni Rabuka and Pio Tikoduadua, who bring about 100 years of military service between them, can bring unification and lead by example to work for the country as a united front.

In addition it would be critical to have a representative from the Fiji Women’s Crisis Centre and two other respected NGOs as a balance. Gandhi and Mandela’s biggest strength was unity of the people and perhaps it is finally time to form a government of national unity and work in unison for a better Fiji.

This is a unique chance out of desperate times for egos, self pride and selfishness to go out of the window; this can be filled with humility, humbleness and kindness.

It is good to have opposing views and implement different strategies to get the nation moving not tomorrow, but now.

As a concerned citizen, worried about the future, we need to work together now and learn from the greats like Mandela and Gandhi, before it’s too late.

“United we stand, divided we fall”.