A tribute to Dr Va 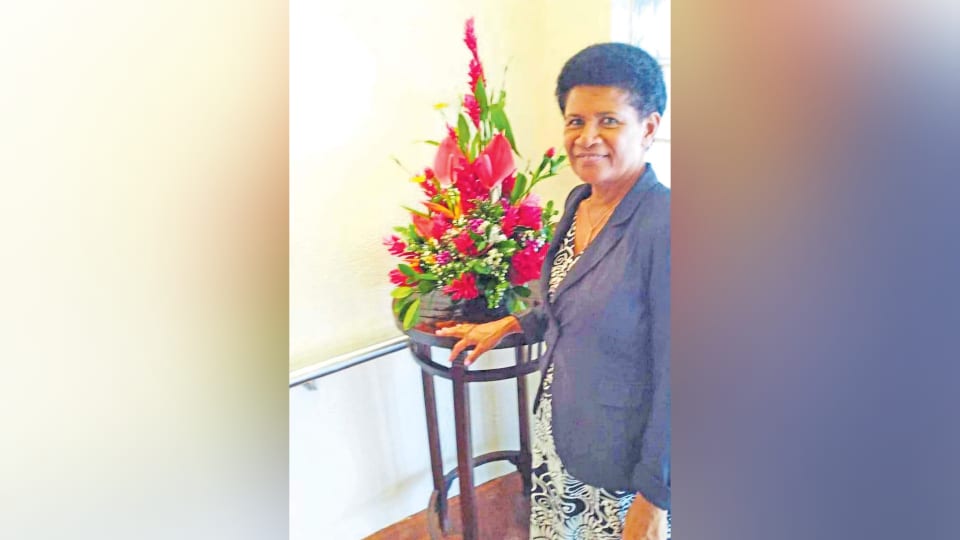 When you take a walk in the garden early in the morning, you will come across some mesmerising flowers that you hope will not wilt.

But these flowers cannot last forever, nature takes its cause and the flowers will eventually have to pass on. We can only take photos of it and think of its beauty, nothing more than that, unfortunately.

On the fine morning of April 29, 2022, I was engrossed heavily with my work errands, when an email from one of my colleagues popped up. Usually, I would not receive any early morning emails from him, but this one was an excruciating one.

To my utter sadness as much as startledness, I quickly opened the email only to read the emotive news that she took her last breath; Fiji National University’s, School of Communication, Languages and Literature lost the academia, who never knew to belittle or criticised anyone, but kept prowessing aspiring academia’s to keep moving forward, keep excelling for sky is the limit.

Starting off her career as a primary school teacher, gradually moving onto with high school teaching and later joining tertiary sector as an academic, Dr. Va and I worked together back in the year 2017, when she joined FNU as an Assistant Professor of Applied Linguistics.

Being an aspiring young academia and with very short span of time, Dr Va’s academia relationship with her staff was never doubted. I vividly remember, she mentioned to me once, “… if you want to excel in the world of academia, you have to put your foot down and embrace criticisms, as it will come by.

Be who you are and let others judge your work; for the input that you are exerting will be your own success one day …”. These prowessing words of a motherly figure like academic was all that I needed to work towards my PhD.

Coming from a teaching back ground majority of her life, Dr Va’s sheer zeal showed many a beacon of hope, in particular, the buddying academic’s not to look back but keep climbing the ladder of success.

Being my Head of Department and later Head of School, she would never let her staff experience any sort of downfall whatsoever and would make sure always that the staff stand up for their rights. In any organisation, we have these so called “stooges” who would have this hobby of demeaning and badmouthing about their colleagues to their superiors.

The sole reason for this would be academic jealousy, hence, I encountered the same.

However, under the leadership of Dr Va, what I gained from her is that, no matter what and who conspires about you, do not get paranoid. Always remain neutral and handle the situation amicably for someone is watching and the perpetrator will be “rewarded”.

Dr Va stood out because she represented the true Fijian spirt in everything she did. You would often find her wearing a sulu jamba that was made from a sari. She was good in cooking Indian dishes too, I remember asking her about the curry spices and she listed all the spices without fail.

There was only humanity for her, she did not differentiate the ethnic groups as some still do.

She never practiced nepotism, whether they be her staff or students, everyone was given equal respect.

I mean what else could be expected from such a noble and upright person like her.

After getting the news about Na’s sudden departure, a boggling question popped up in my mind, how long does it take to know someone and forget about that same person?

With Dr. Va, she was the quintessence to absolute professionalism, a person who was down to earth, kind and humble, charismatic, in fact, an academic with words beyond description. Being ambitious in life was Dr. Va’s passion and she would encourage me always to remain determined and keep focusing on my PhD studies.

In 2020, Dr. Va became the Associate Dean-Teaching & Learning for College of Humanities and Education at Fiji National University. During her Associate Deanship, she rendered her assistance towards me in regards to publishing journals in tier 1.

As a novice academic, I found her assistance highly fruitful, as she removed her cap of Associate Dean and stooped low in order to make sure I mastered the best about research.

Further, as stated above, coming from the teaching background most of her life, Dr Va attained her fi rst qualifi cation from Nasinu Teachers College (now FNU) in the year 1977, where she received her teaching certificate.

In the year 1996, she obtained her Bachelor’s degree in Language and Literature from the University of the South Pacific.

Respectively, in the year’s 2001 and 2008, Dr Va received her Postgraduate Diploma and Masters in Education from the University of the South Pacifi c yet again.

As highlighted earlier, having the passion for excelling to the optimum, in 2014, she was awarded the Chinese Government Scholarship to do her Doctor of Philosophy degree in Applied Linguistics from Tsinghua University, Beijing, China.

After spending her time abroad in foreign land, she returned to Fiji and got affi liated with Fiji National University. Until her retirement days, she was with this institution as an academic. Dr Va was my alma mater.

Flowers bloom again in the next season, even when they are gone we can remember the fragrance they leave behind. A person who leaves their imprint on others truly needs to be cherished.

There can never be another Dr Vasemaca Alifereti (Dr Va), but I pray that wherever she is, may she be our guardian angel so that we can walk her path someday.