The beach house at Nukubalavu made from containers. Picture SUPPLIED

A visit to Fiji in 1984 gave birth to the beginning of dream to live and thrive in Fiji that would eventuate in the 21st century along the white sandy beaches of Savusavu.

When American investor Robert Bryce returned in 2008 after sailing the Pacific waters, he knew it was time to achieve that dream seen in the 1980s.

After he became a Fiji citizen, in assimilated slow and thoughtful Fiji manner, he went to work on a plan to use Fiji lease land with a new more benevolent approach.

Today, seven beach houses stand along the white sandy beach at Nukubalavu in Savusavu, with nine more orders to build. “In early 2018 we started to make the first beach house from a shipping container,” he said.

While Mr Bryce, better known as Robert, has built and funded this project, he followed through with his win-win concept ensuring that the landowners fully benefited. 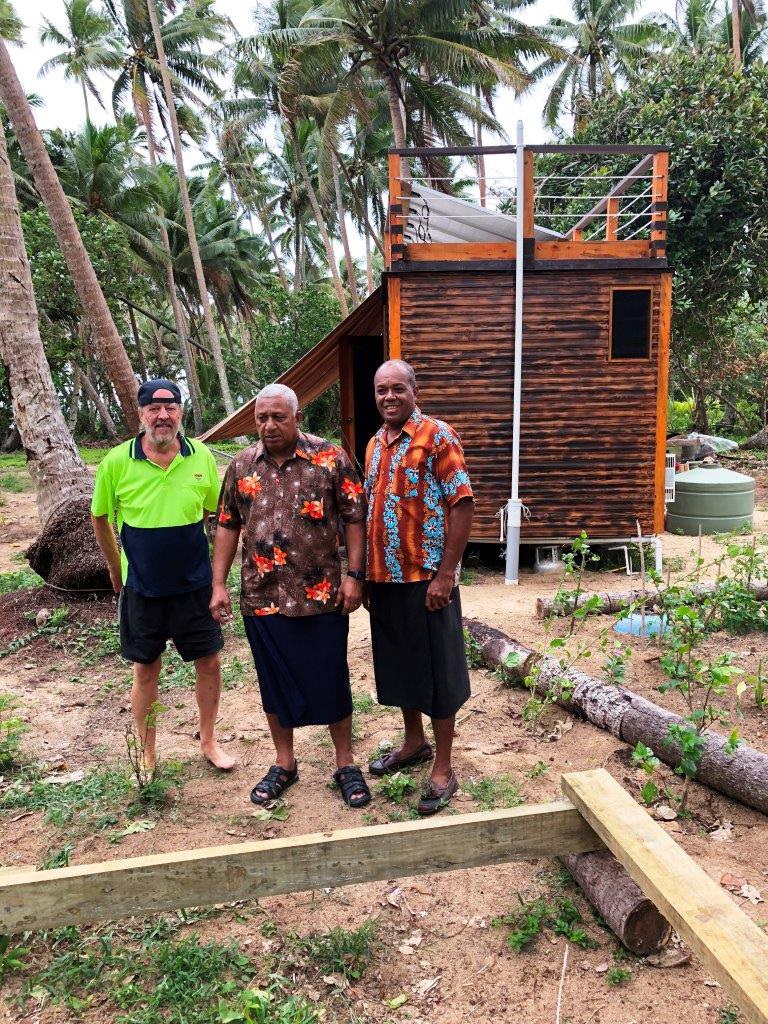 Prime Minister Voreqe Bainimarama in one of his earlier visits to the beach houses. Picture SUPPLIED

“I determined that there was a market for low-cost beach houses that were right on the beach. I considered lease land as the best option because it was the best beach close to Savusavu and served my concept of how to make leasing of village land fairer and more equitable,” he added.

“This would ensure ongoing appreciation and faithful co-operation. I structured the iTaukei Land Trust Board lease of the mataqali land, leasing it back to the mataqali. In this way the mataqali could sublet it directly to the buyers of my beach houses made from shipping containers.

“The mataqali would take all the money from their land and I would earn mine from the sale and making the beach houses. A classic win-win model for Fiji and my subtle way of saying thank you for my citizenship too.”

Mr Bryce said the mataqali landowners now earned more than $100,000 per year in rental income from the leasing of the placement on the beach to the buyers of the beach houses. The lot areas are a quarter acre each and 100 per cent of the rent goes to the mataqali at $F440 per month for each lot.

“And we have a total of 19 lots leased now and more to go so the landowners will continually benefit from this, year after year,” he said.

“They are doing better than I am,” he proudly exclaimed. He said support from the Government had been superb and confidence was a primary reason he pursued his successful project.

“In the early stages of the project the Prime Minister Voreqe Bainimarama came to the beach in a 10-car caravan to check this unusually structured project out. “I met him there and he gave me a thumbs up and offered me help from Commissioner Northern and the Ministry of Tourism, which ensued and I am pleased for this kind consideration and the result.”

When this project started, Mr Bryce rented out one of the beach houses as he wanted to see what the market demand would be like for a real beach house, right on the beach.

A beach house that belongs to Mr Bryce in Savusavu. Picture SUPPLIED

“The next day after signing up with online rental agencies, the response started to flow in with bookings and high interest from tourists to stay in beach houses,” he said.

“I rented one just to see how that would go and it went very well and was booked almost all the time for nearly a year, until Covid arrived.

“COVID caused me to abandon the rental idea and sell the beach houses, then suddenly there were more buyers than houses available. This was because I could sell a one bedroom for less than $US50,000 each and still make a profit.”

According to Google searches, these are the cheapest beach houses in the world.

Mr Bryce said the formula was working and everyone was happy now, so his dream was alive and well.

“However, it might be time to layback in a lounge chair on the beach and enjoy the dream like a tourist.

“I am 77 now and have resigned as director of the company making the beach houses from shipping containers.

“I will let my loyal and capable crew run the business, of course I will consult as needed.”