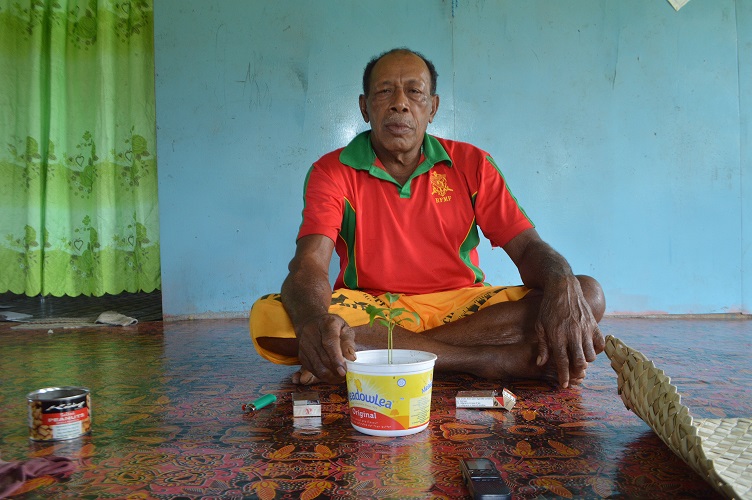 Man of the land and mana, Iosefo Rapuga with a Lebakula seedling, the totem tree of his people. Picture: LUKE RAWALAI

DESCENDED from one of the oldest clans on the island of Taveuni, one has to listen to Iosefo Rapuga share his knowledge on folklore to know that this man is indeed gifted with the silver tongue especially with his ability to hold his audience enthralled with his folklores.

This is the same man who brought us the original story of the Tagimoucia story last year — a tale of bitter sweet love between a royal lady from the chiefly house of Navuga, Adi Sovatabua and her true love, a prince from the Island of Laucala.

Mr Rapuga is the turaga-ni-mataqali (clan leader) for Naituku of Bouma, the people who claim to be the first settlers of Taveuni, tracing themselves back to Nakauvadra in Ra, the cradle of Fijian existence and civilisation before they were scattered to other parts of Fiji.

For the 56-year-old and father of two boys, the art of storytelling came to him under strange circumstances, which most would question — whether his talent is a blessing, mana or a gift from the dark side.

Born in 1962, he is the youngest of a family of seven children and Mr Rapuga was of course the spoilt one of the lot often left to do as he wished.

While his older siblings would sit and learn from their father — the former head of their mataqali — of the ancient lores and stories of his people, Mr Rapuga found this as common banter between parents and their children choosing to immerse himself in his own small world.

However, things changed for Mr Rapuga after the passing of his father in 2009. He woke up one morning to find that he could remember all his father’s stories.

Mr Rapuga said all that he needed to do was open his mouth and the words would flow out of his mouth.

Because his stories sometimes did not agree with tales that have been passed down erroneously through generations it had caused controversy among clans leading people to ask about his knowledge in the lore.

Mr Rapuga’s sisters have even approached him asking him to control his tongue when it came to matters concerning the vanua and the traditional roles within the vanua o Bouma, but he says he cannot hide the truth.

Mr Rapuga said it was like the truth haunted him and all he had to do was open his mouth in order for him to have peace.

“All the stories and legends got passed on to me and my older sisters thought I would not know or remember any of the stories because I hardly listened to my father when he spoke of them when he was alive,” he said.

“Later during a family meeting, I was directly approached and questioned about my stories which was fast attracting a big following and my own siblings even asked me how come they didn’t have the gift and knowledge about the island’s history.

“I hardly listened to the stories, but I know of them because it is a gift and it must be told as these are the stories of our land and of our people.”

He said by 1999, he had started telling the histories of Taveuni. During his chiefly installation a few years ago, Mr Rapuga was traditionally recognised by his people as head of their landowning unit.

Mr Rapuga said on that day, he was dressed in traditional costumes by members of the  clan responsible and was led to the village green for the blessings of the church priests.

Mr Rapuga said he was still amazed by the silence that followed the ritual, which to him spelled the vanua’s assent. No dogs barked nor birds chirped on that special day.

“To me, the silence was because the vanua was waiting in abated breath to see and hear whether its servant (me) would obey its calling,” he said.

“I couldn’t stop tears welled up in my eyes as I told myself I was ready to become a servant to my vanua and mataqali like my ancestors before me.

“After the installation, I was led back to my house and something strange happened.

“As I was a few steps away from the door to my house, there appeared to be a giant of a man was standing in the house oiled with a club and standing as if waiting for me to enter.

“I froze in terror as I realised that none of those inside the house including the sentries at the doorway recognised the man and later I always told myself it was a good omen signalling my ancestors assent to my traditional installation.”

After regaining his strength, Mr Rapuga continued walking and before he stepped into the threshold of the doorway the man vanished.

“I am not trying to justify my installation with these strange events, but the whole experience taught me to accept my calling as a servant to my people,” he said.

“To this day, I am nothing much and nothing less, but a servant to the will of the vanua and my people.”

Mr Rapuga continues to lead his mataqali o Naituku in the vanua o Bouma on the Northern end of Taveuni, always offering to answer the questioning minds of his people in traditional lore and counselling them.

In this new era, Mr Rapuga said he has learnt to work with specialists in various fields and seek their counsel on the protection of the vanua’s resources something that he believed was bestowed upon the mataqali o Naituku by God.