A picture and its story: Dogs in the disaster zone 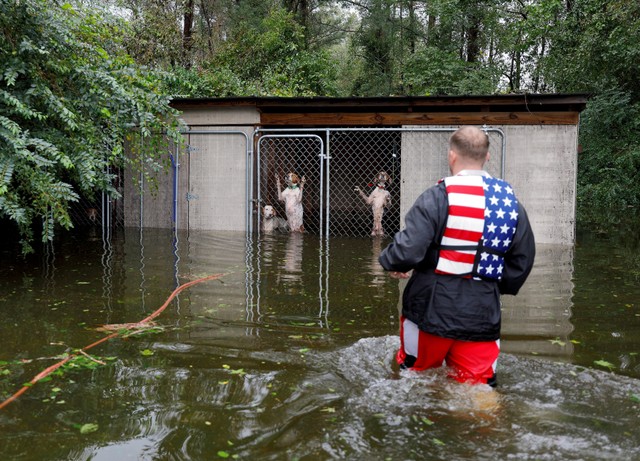 FILE PHOTO: Panicked dogs that were left caged by an owner who fled rising floodwater in the aftermath of Hurricane Florence, are rescued by volunteer rescuer Ryan Nichols of Longview, Texas, in Leland, North Carolina, U.S., September 16, 2018. REUTERS/Jonathan Drake/File Photo

LELAND, N.C. (Reuters) – Three days after Hurricane Florence made landfall in North Carolina, I was documenting the damage to Wilmington and communities to the south when I was tipped that volunteer rescuers were headed to a Leland church where people were isolated by rising floodwaters.

Even with a pickup truck, it is daunting to drive through waters dark and deep enough to obscure road signs. But experience covering storms and good waders enable you to cautiously measure water depth and current strength so you can get to compelling stories waiting to be told.

Ryan Nichols and David Rebollar have another way of getting to people and animals trapped by floods: a boat they haul from their Texas home to disaster zones. In the case of North Carolina, that was more than a thousand miles (1,600 km).

Having endured Hurricane Harvey, which hit Houston last year, the former Marines are on a mission to help when disaster strikes.

This day, as they lowered their craft into the water from a slice of dry land, a road was identifiable only by a few 7-foot-high street signs jutting above water. My colleague and I joined Nichols in the boat, and we made our way to the church about a thousand feet (300 metres) ahead.

While Nichols spoke with people at the church, we heard persistent barking at the back of a property across from it. He went to investigate and before long reappeared, saying urgently that “they” were trapped and we should hurry.

We moved through knee-high water until we saw three hounds in a caged doghouse – two on their hind legs, the other on all fours with its head just above water. They were trembling, terrified and desperate to get out.

Nichols tried to soothe the dogs as he worked to open the cage. When he did, not three but six dogs bounded out, half swimming, half bouncing through a stretch of water that led to nearby dry ground. I followed the action with my camera close to the water at their height.

A neighbor up the street found some dog food, which they devoured.

With more and more people in the vicinity needing help, the volunteers and local residents decided to leave a lot of food for the dogs and let them roam on the higher ground to which they now had access and to tell local authorities about them.

Floodwaters rose in the hours that followed, and only began receding the next day, when Nichols returned to check on the dogs. He encountered their owner, who said she had had to evacuate in haste with young children, and that someone sent to check on the dogs was refused entry to the area because of flooding.