A ‘new space for new beginnings’ 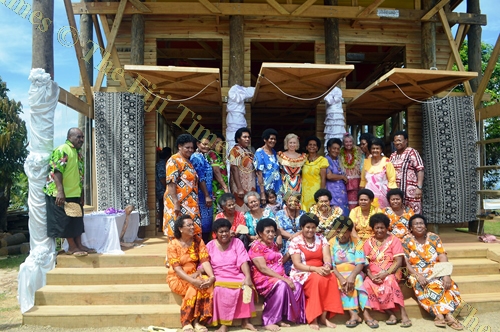 SILENCE fell on the Naidi Village green as villagers accorded a traditional ceremony to welcome Princess Jazmin Grace Grimaldi of Monaco who officiated at the opening of their new village hall.

The princess, who is the daughter of Albert II, Prince of Monaco, said she was touched by the hospitality and the traditional welcome ceremony she received from the people yesterday.

Representing her own fund, The Jazmin Fund, the emotional royal could not hold back her tears as she walked into the new hall to see the result of what she had fundraised for back in the US.

Addressing villagers, Princess Jasmine commended the hard work and sacrifice put into the structure by villagers and members of the architect group from the UK, Caukin Studio.

“The hall symbolises a new space for new beginnings, where villagers can come together for making beautiful memories and making a better community,” she said.

“This is your second home, a space to breed love, creativity, passion and love, a place to showcase your crafts and sell them to tourists to earn a living and I hope you are proud of your hall.

“This is an example of what can be achieved if everyone puts away their differences for a common goal.”

The Jaszmin Fund and other donors, including Caukin Studio, John Gore Foundation and Fulton Hogan Hiways, contributed through the Naqaqa Giving Foundation (NGF) who facilitated the project.

Caukin Studio’s director Joshua Peasley said the eight weeks they had spent in the village of Naidi had made them richer because of the lovely experiences and bonds they had established with villagers.

NGF’s executive director Max Cross said the new hall was worth more than $75,000. Meanwhile, work continues on the implementation of its other facilities.