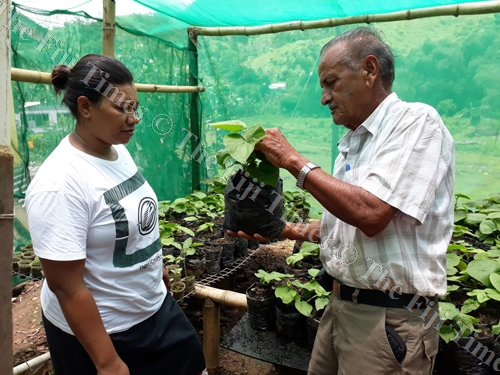 A KAVA bar in the US, a nakamal in Vanuatu and that “baby mix” any day of the week in Fiji all share one thing in common: kava. Not just any kava, what’s in demand is quality kava.
Quality is the new buzzword across kava-producing Pacific Island countries and a motivating factor for kava growers, processors and exporters to lift their game given the good price kava now fetches in domestic and global markets.
With the evolution of kava from a ceremonial drink to an established cash crop sold in domestic and export markets around the world, Pacific kava industries have had to prioritise improvements to quality along the production and marketing chain.
To support this effort, the Pacific Horticultural and Agricultural Market Access (PHAMA) Program, an Australian and New Zealand-funded aid-for-trade program, has partnered with governments in Fiji, Samoa and Vanuatu to develop national kava quality standards and manuals explaining production and processing methods, a practical and cost-effective testing method and establish kava nurseries.
With tens of thousands of people in Fiji, Samoa and Vanuatu dependent on the kava trade for their livelihood, the work to improve quality is all the more crucial for the Pacific kava industry.

Fiji
In Fiji, kava is a $F320 million economy with domestic sales valued at 92 per cent and exports at 8 per cent. Based on 2015 statistics, more than 20,000 farms or 58.3 per cent of farms around the country produce kava. Locally known as yaqona, kava was previously reserved as a ceremonial drink but is today used socially.
PHAMA’s work to improve kava quality in Fiji has helped to protect kava exports valued at approximately $F7.5m to the end of 2020; taking into account the contributions of Fiji’s ministries of Agriculture and Health, and government agencies.
Local farmers such as Vani Naucukidi, who have benefited from PHAMA’s support, are now leading the way with a new farming approach. Where she once walked long distances to get to her farm and endured laborious tasks associated with kava farming, the new approach offers a ray of hope for Fiji and regional farmers. Her farm today is a nursery about a stone’s throw from her home in Lovoni Village, Ovalau.
Ms Naucukidi and other farmers with nurseries are changing the game as they position themselves as critical players in the kava value chain. After a spate of natural disasters, affected kava farmers were left struggling to restore their farms because of the shortage of planting materials. Since setting up her nursery in late 2017, Ms Naucukidi has sold more than 300 seedlings at $F10 each to farmers from as far as Suva. She is now looking to expand her nursery.
The nursery-raised kava plants offer many advantages: they are more resilient, less expensive to maintain and offer a better yield. Eventually, these advantages will translate to better quality kava that will attract better prices.
Initial feedback on the usefulness of the National Kava Standard and Fiji Kava Quality Manual launched in Fiji last year indicate change is happening.
Losana Nakato, an extension officer based on Ovalau Island, said the manual had been particularly useful to youths who were new to the kava trade and had begun buying green or mature kava plants for processing as a way of entering the kava trade.
Kadavu farmer Eviame Cagilaba said with the information in the manual, farmers could now identify diseases affecting plants and were considering alternative ways of drying kava. Sefanaia Nakidakida of Wainigata Research Station in Savusavu said farmers were able to differentiate kava varieties and now focused on mass production of specific varieties demanded by exporters.

Samoa
Kava, known as ‘ava in Samoa, has also been a culturally significant crop for the country.
Export production decreased significantly following the closure of the European market in the 1990s. To address market concerns on quality, PHAMA has supported efforts to introduce quality standards and complementary activities such as quality assurance systems.
This led to the development of the ‘Ava Standard and ‘Ava Regulation through the Samoa Market Access Working Group. The work was led by Samoa’s Ministry of Commerce, Industry and Labour in collaboration with the Scientific Research Organisation of Samoa, the ministries of Agriculture and Fisheries, and Health, representatives of farmer organisations and PHAMA. The documents were launched in May 2018 and several awareness initiatives have since been carried out in kava-producing parts of Samoa to inform growers about the standard and regulation.

Vanuatu
In neighbouring Vanuatu, about 18,000 or 32 per cent of all rural households grow kava.
Vanuatu kava consultant Emily Tumukon said there was noticeable change taking place despite initial reservations about the Kava Standard and Manual.
“The Department of Agriculture has used the manual to raise awareness and educate farmers to plant noble varieties. The department has built nurseries on kava-producing islands, distributed planting materials, and provided poly bags (for propagating kava plants). Exporters and regulatory bodies now use colourimetric test kits to test for noble varieties,” she said.
“Biosecurity Vanuatu is inspecting processing facilities and also inspects each consignment of kava before it is exported,” she said. Mrs Tumukon said the recent destruction of almost two tonnes of wild kava had sent a strong message to rural communities that “narafala” kava, also known as tudei or wild kava, would not be accepted for export.
In Vanuatu, PHAMA’s work has contributed to the protection of annual kava exports of $F15.6m (VUV828.8m). Through the Vanuatu Kava Industry Association, PHAMA has contributed to maintaining over $F18.6m (VUV989m) in kava exports from Vanuatu to the end of 2020.

Technical support
PHAMA’s support for Pacific kava industries is aligned with its objectives to maintain and improve existing market access by developing the capacity of the public and private sectors to meet market requirements, including compliance with international food safety standards.
The launch of national kava standards in Fiji, Samoa and Vanuatu are a significant move that could prevent a repeat of kava bans such as that imposed by the European Union during the 1990s but has since been lifted.
Overall, PHAMA’s support for Fiji and Vanuatu’s kava industries has resulted in the protection of approximately $F26.5m of annual kava exports and 39,000 livelihoods.
PHAMA has also supported efforts to gain the Codex Commission’s (International Food Safety Standards organisation) endorsement to develop a regional kava standard. While the regional kava standard may take some time to finalise, the approved quality standards in Fiji, Samoa and Vanuatu will go a long way to restoring market confidence by demonstrating adherence to an agreed standard.
A delicate plant, kava requires patient handling from the first step. With all the initiatives and effort invested into improving Pacific kava, quality is today the best business plan across the isles.

*Samantha Rina is the communications officer for the PHAMA Project.